I don’t often write a post just on sports. But I think this one is necessary based on what I’ve observed in my own hometown and others. This comes from years of coaching and watching my own sons play, and even wrestling with my own heart to keep what’s important—important—and forsake the unimportant. For a theological perspective, I highly recommend Jim Elliff’s post, When Ball becomes Baal.

Baseball, they say, is America’s pastime. Peanuts, crackerjacks, and “three strikes you’re out” are woven into the very fabric of our culture. And though its interest waxes and wanes as the years roll on, baseball will be around forever — at least until the Lord Jesus returns.

It’s such a pure game. It’s two teams versus one another, and yet it’s more than that. It’s a pitcher versus a batter. It’s a catcher versus a stealer. And it’s even one player versus himself as he seeks to be the best version of a baseball player that he can be.

There are countless lessons to be learned in baseball. Once a ball leaves your hands there’s nothing you can do about it. Forget the last pitch and focus on the next. Teamwork. Camaraderie. Overcoming adversity. Bad calls. Good strategy. Breathtaking victories and heartbreaking defeats.

Baseball is a wonderful game.

What is Rec League Baseball?

We also see “played for fun.” I think that’s another crucial component of recreational baseball. Of course, we know the old adage, “winning is fun.” And that is definitely true. Winning is fun. And recreational baseball teams ought to do the very best they can in putting their teams in positions to win ball games. This includes good practices, solid lineups, and appropriate in-game strategies to help a team reach victory.

Yet, winning recreational baseball isn’t everything. It’s not even the highest goal actually. At the baseball fields in my hometown, there are a few reminders of this. There are signs commemorating state championships just a few years ago that are now fading. The names are becoming unrecognizable. In the “board room” there are trophies stacked in a pile of junk. Victories once seen as the most important thing in the world: now casually tossed in the trash heap. Sure, a handful of people will remember those runs for some years to come, but as each year passes that previous season becomes less and less important.

This is not to diminish any team’s state championship. Those are notable, appreciated, and remarkable. Yet, these are only one part of recreational baseball and dare I say, only a small part.

If a parent chooses, he or she can take little Johnny, commit to missing 12 or more Sundays of church a year, invest thousands of dollars (when you add up the cost to play, eat, travel, etc), and in return receive “elite-level baseball.” And some might say “well, there’s nothing wrong with that” but actually there is. But that is not the purpose of this post. (see Jim Elliff’s post)

What is recreational baseball?

Well, it’s still real baseball. But its design is to give children in a local community the opportunity to play one of the greatest games ever invented who otherwise would never have that shot. To give them the opportunity to experience the fun of baseball. It gives young boys and young men the chance to build lasting friendships. To learn how to win and how to lose as a team. The exhilarating thrill of a homerun. The frustration of a called strike three that was too low.

Some boys come from great homes. Some are from troubled homes. Some boys come from wealthy homes. Some from homes struggling to make ends meet. Some boys need a father figure. Some boys are picked on at school and need real friends. But every American boy deserves an opportunity to hold a bat in his hand, step up to the plate, look that pitcher in the eye, and think to himself “I am the greatest player of them all.” And in those waning seconds, that little boy, that young man, is on top of the world.

Some have said recreational baseball is about getting boys ready for high school baseball. In some ways that’s true. But even that misses the overarching point. Because recreational ball has higher goals in mind: Not just building champions of a game, but champions of life.

True, if you’re making millions of dollars to win college football games, that’s a lame statement. But if you’re a volunteer dad who played a little baseball when you were younger, who doesn’t have the “extra” time to give, but gives it anyway, for the love of the game, for the love of young men, for the love of a community, well, that ought to be your mantra. Recreational baseball is not about “program building.” It’s about building young boys and young men — building integrity, character, and a proper competitive spirit that will help children later in life. And all the while those boys are having fun while doing it.

Yes, but what does all of this mean practically?

Some can be so frustrated by this that they choose to daydream of Cy Young awards as they fork over another grand to play in a more serious league. But by doing so, not only are you, in my opinion, hurting the spiritual formation of your child and family, you are also leaving behind kids in your own hometown.

If we will remember what recreational baseball is and isn’t, we can choose to change our perspective. Small towns can come together as a community and, here’s an apt analogy, play as a team. Sometimes an age group will feature a “cool team” and the “Bad news bears” team. I have personally had sons on both and coached both! But we have this brief moment, this fleeting season, to let all boys play this great game.

Very soon — too soon! — these boys will be having boys of their own. And in this short time while they are little, we have to ensure that the children get to be children, while the adults remain adults — and we have to be careful of not flipping that script in our minds and actions, that is, thinking our children are major league adults while we adults act like children.

So, sometimes a kid wanted to play short but got stuck in right. Sometimes they wanted to bat 3rd, but are listed on the lineup at 7th. Sometimes they just wanted to get on base but struck out. But coaches and parents have the great opportunity to teach children about life in these moments.

The reverse is true too. Sometimes a kid has no confidence, but they hit a triple, strike out the side, or make a diving game-winning catch. We can teach these boys how to win with grace and lose with dignity. And we can teach them the fun of it all — every pitch, every steal, every run, every cheer of the crowd.

If all this is true, and it is, then what place does recruiting or stacking teams have in recreational baseball? None. True, it’s a good thing to reward teams who have put time and effort in over the years to stay together. But sometimes the logistics of keeping teams together just doesn’t work out well. It’s small-town recreational baseball, after all.

And if we forget our focus, we can actually let competition drive us to leave one group of kids in the dust while we fight to play with another group all so we can…Well, I can’t finish that sentence. Because I don’t really know what it is we are chasing. A ring? Self-glory? A D1 scholarship? Are those things ultimately about parents or children? It has been my opinion for some time that travel baseball has mostly been about parents, A son will follow the lead of his father. If a dad pushes a son to miss church, play “elite,” play 40 games, that’s what he’ll do. If a dad says to a son, “Hey, we love baseball. It’s fun. But it’s not life. And we aren’t going to make sacrifices to it as though it is Baal”, a son will follow that lead too.

Lest you think I’m writing from my ivory tower, I’ve been sucked into all of this before too. The thrill of competition is quite exhilarating. But I’ve also found that monster has quite a large appetite — one that can never be filled. Again, it’s why some spend a lot of time and money to feed it. And it’s why some parents and coaches have even been caught cheating — sacrificing their integrity so their 10-year-old boy can win a game. What an awful defeat such a victory is.

If the only way we can have fun is to cheat or to do so at the expense of other children, we have really missed what life is all about. If the only way baseball becomes fun is by idolatrous sacrifice, then we have misunderstood God’s goodness to us in giving us this game.

And we can’t ultimately teach a young man to keep his eye on the ball if we have failed to keep our eyes focused on what is right, good, and ultimately important in life.

So what am I saying here? Yes, we ought to teach our kids to play the game to the best of their ability. We ought to reward those who practice hard. And we do have to realize sometimes kids won’t get a chance to bat in a game (but we also should never let that stretch into two games). And we should try to win games, even many games, even state championships — but not at all costs.

Our sons are watching. 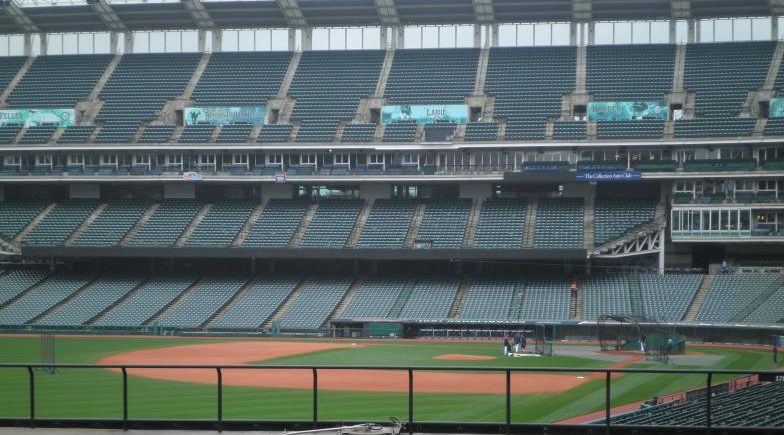 Reflections on a World Without Sports

It's over. America's sportsless drought is over. We've gone months without professional team sports and it's finally over. Sports are back. As an avid sports fan, I am thrilled. When 2020 did its thing and canceled sports I was devastated. In the month of March alone,...