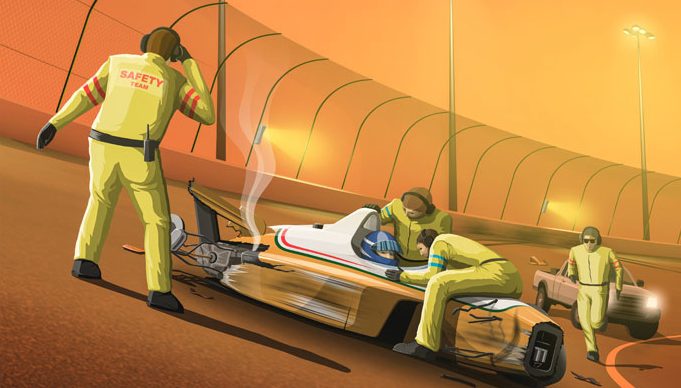 With the deaths of Jessi Combs and Anthoine Hubert coming not long before its theatrical release in September 2019, Rapid Response is a grim reminder of a certain sentiment of every race fan: it stinks to watch drivers die. The other side of that is this: we in 2019 have it “pretty good” compared to decades past thanks to the efforts of a few heroes off the track. Within IndyCar in particular, a couple of those heroes are Dr. Stephen Olvey and Dr. Terry Trammell. Rapid Response is a film adaptation of Olvey’s book of the same name that chronicles the development of IndyCar safety from Olvey’s first experiences as a medical doctor as to where the IndyCar safety team is today. I was given free early access to the film courtesy of its distributors.

Unlike every other reviewer of this movie so far, I’m writing to an audience of people who mostly aren’t fans of motorsports. At this point, if you’re even still here, you’re asking whether this is worth your time. I can’t say for certain, but let me focus on helping you decide.

Unless both you and your spouse have a strong interest in emergency medicine, or you both really are race fans and might have already made a decision, this is almost certainly not a date night movie. It does not shy away from showing fatal crashes and many of them. And unlike with motorsport crashes in closed-cockpit cars that largely hide what is actually happening to the driver, the visually sensitive have no such luxury with open-cockpit cars, especially in older wrecks in which the car was liable to disintegrate around the driver. Some reviewers have questioned whether Rapid Response goes too far with showing fatalities. Personally, I feel like they struck the right balance, but you might be more sensitive. When I first wrote this review, it was on the occasion of its theatrical release. I’m assuming a scary crash video is easier to handle on my 15-inch MacBook Pro than in IMAX.

The presentation isn’t all big crashes. A large part of the video is testimony by Olvey, Trammell, and various drivers including Mario Andretti, Bobby Unser, Helio Castroneves, and Tony Kanaan. The safety developments covered include the dedicated IndyCar safety team, the HANS device, concussion research, and the safer construction of cars and facilities. The story itself is worthwhile but quite narrow in its focus, concluding with the triumphant survival of Alex Zanardi, who lost both of his legs in a devastating accident and later became an Olympic gold medal-winning hand cyclist and even returned to motor racing. Why does this car look like a hearse instead of an ambulance? That’s because it’s a hearse. “Conkle” is the name of a funeral home. Such were the times.

But Zanardi’s wreck happened in 2001, eighteen years ago to the month. One major weakness in Rapid Response is that not much if anything is said about changes since 2001 and future changes needed. Only about a year ago did we see Robert Wickens’ spinal injury due to the current state of catch fencing, and IndyCar is about to introduce the new Red Bull Aeroscreen cockpit protection device. We also don’t get to hear anything about Greg Moore, Dan Wheldon, or Justin Wilson, the latter two being the most recent fatalities in 2011 and 2015, respectively. Then again, Olvey ended his time as CART’s medical director in 2003, so maybe this movie is just coming out too late. A lot has happened since 2003.

Wait a sec…what’s CART? You mean like go-carts? Why does Garrett keep switching words and not explaining himself? Exactly. I kept track of business changes like this in the movie because I’m a hard-core fan and already know these things. You might not.

I found some aspects really interesting on a more personal level than just being a race fan. Having received my own hand injury at work (thankfully not in a race car), it would appear that Tony Kanaan had much better rehabilitation care on his broken wrist from Dr. Trammell, an orthopedic surgeon. The story of the 2001 race cancellation at Texas Motor Speedway (due to all the drivers experiencing g-loc!) was interesting, as the track is just down the road from me. Finally, if you’re interested in what raceway ministry is like, the descriptions of the race track atmosphere might be helpful. Some of these descriptions on video include what happens outdoors with alcohol en masse, so your eyes may not appreciate how some fans are dressed.

Overall, I’m glad I was able to watch Rapid Response. You might enjoy it as well, but its focus might only be particularly attractive for a certain narrow audience.

I also had a chance to read the book after I originally reviewed the film. Given the medium’s fewer limitations, the book is nicely detailed in its descriptions and coverage of topics including those not addressed at all in the film. It also has much more foul language. My verdict for any non-race fan is about the same: general audiences should find it interesting, but I’m not going to insist you read it. I do strongly recommend it to any open-wheel race fan.

This post was originally published in September 2019. I updated it in May 2020 to reflect the film’s availability on streaming platforms, my re-watching it, and the book.