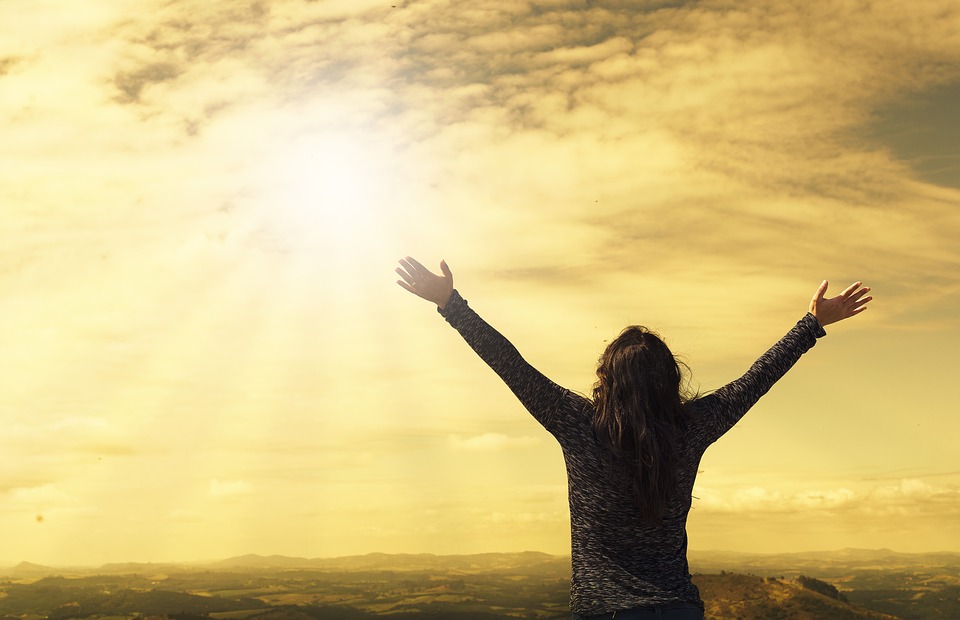 I sought the LORD, and He answered me, And delivered me from all my fears. They looked to Him and were radiant, And their faces will never be ashamed. {Psa 34:4-5 NASB} Verses 4-7 start to develop the themes of brokenness that dominate most of the rest of the Psalm.  The ideas of fear, shame, affliction, trouble, and rescue are all in this section. Last week we talked of the three couplets that dominate the first third of the Psalm (v2+3, 4+5, & 6+7).  As I mentioned last week, these couplets first say something about David and then second say something about the audience.  Verse 4 begins our second couplet.  David tells of seeking the Lord, and the Lord’s response of answering him, delivering him from all his fears.

Understanding the pattern of couplets at work here, we see how it helps our interpretation.  When we believers look to God in verse 5, we already know God is looking back at us (which foreshadows Psalm 34:15) because we see that the Lord answered David in verse 4.  The pattern would be broken if suddenly David was set in CONTRAST to his audience. Rather, what David is doing here is a using a very Hebrew method of teaching — taking a small example and then expanding it out to a greater example. Jesus did this in Matthew 10 where he pointed to the sparrows and the lilies, teaching that God cares for them, so obviously He’s going to care much more for you.  David sought the Lord and God answered Him, delivering David from all his fears. So when you look to him, you are radiant BECAUSE God’s face is turned toward you just as it was for David.

It’s important to talk of two words in this couplet which must be well understood to help drive the meaning home.  The first is the word for “sought” used in verse 4.   The word is “darash“.   What is important about this word is that it should not strike our ear as a search for something we once had or that is now lost.  It’s a common word used 167 times in Scripture, and it is NEVER used for finding something that’s lost.  Rather, the meaning is better understood to be the action of tracking down something that is known.  Often, it has a non tangible meaning such as “seek” wisdom, or “search” for an answer.  Genesis 25:22 says “so she went to INQUIRE of the Lord”, Deuteronomy 13:14 comes out as “then you shall “INVESTIGATE”.  Gerald Wilson says “Such seeking is serious, purposeful searching; not confused wondering or wandering.”1

The second word we must understand properly is also in verse 4.  The word “delivered” is another common word “nasal“.  The word means to be snatched away, rescued, drawn away, etc.  It’s sometimes used in the Psalms as a rescue from trouble as David used it in Psalm 7:1, sometimes it’s used as salvation from sin as in Psalm 39:8, and sometimes as a way of asking God for help in resisting sin like Psalm 120:2.  The first connotation is in play here, this is a deliverance from trouble.  The reason we make that interpretive decision is because it fits the general theme of this Psalm.  But we must remember that rescue from trouble is one part of a bigger whole and this use here feeds into the greater development of the deliverance of God which is a consistent theme of the Psalms. Christians should therefore have a well rounded view of the deliverance of God. He certainly delivers us from sin, but He ALSO delivers us from our troubles and fears AND gives us the power to resist sin. It’s all part of the same thing.  “Considering the numerous appearances of “nasal” in the Psalms, the theme of deliverance is one of the dominant themes in the Psalms”2 There’s no shame here, and a lot of confidence. David didn’t go groveling to God and hope God was in a good mood. He sought God and God answered, just like a father answers his son.  You look to God and your face will never be ashamed, because your father is not ashamed of you. Spurgeon remarks that this lack of shame is surprising considering the occasion of David making a fool of himself before King Achish. This brings to mind a fact that should not be forgotten easily by the believer: Our lack of shame is entirely due to the grace of God, not to our own merit. This is true when we first believe, it is true when we take our final breath, and it is true in our unseemly moments such as pretending madness in fear of a lowly Canaanite king.

How did David seek God?  The Psalm does not say, but if David was faithful it must have primarily been through prayer.  This verse serves as a reminder that we worship a God who invites us to cast our cares on Him (1 Peter 5:7) and promises to hear our prayers (2Ch 7:15, Pro 15:8, Jas 5:16)  Spurgeon quotes Gurnell saying “God expects to hear from you before you can expect to hear from him.  If you restrain prayer, it is no wonder the mercy promised is restrained.”3

However, bear in mind that David is talking to believers about the relationship God has with believers. This is important because another theme of this Psalm is present in these verses. This Psalm is not for the unbelieving world of Romans 3. Romans 3:11 paraphrases a number of Old Testament passages, including a number of Psalms, to tell us that sinners don’t seek after God. Those who hate God have no claim to the promises of this Psalm, or anything else in Scripture except perhaps verses like 1 John 1:9.  David speaks to unbelievers in other Psalms, but here his audience is believers. We start to see the theme develop here of salvation being a necessary component for all that David will teach us here, it must be present in our minds as we go forward – particularly as we read the final third of the Psalm.

Verse 5 closes the couplet with the notion of radiance for those who look to God, and a claim of the promise of a lack of shame through God’s grace for David’s audience. Countenance is a notion we are relatively unfamiliar with in our modern day. While I am cautious about making too much of facial expressions and body language, to pretend that the Bible does not speak of these things is to tell a lie. In this case the Bible uses it to talk of the change observed in a person when they look to God. They are radiant! As Gerald Wilson puts it, “The believer radiates joy in a tangible, visible way.”4 And, joining with David’s attitude above, they will never be ashamed.  God delivers hearts and countenance!