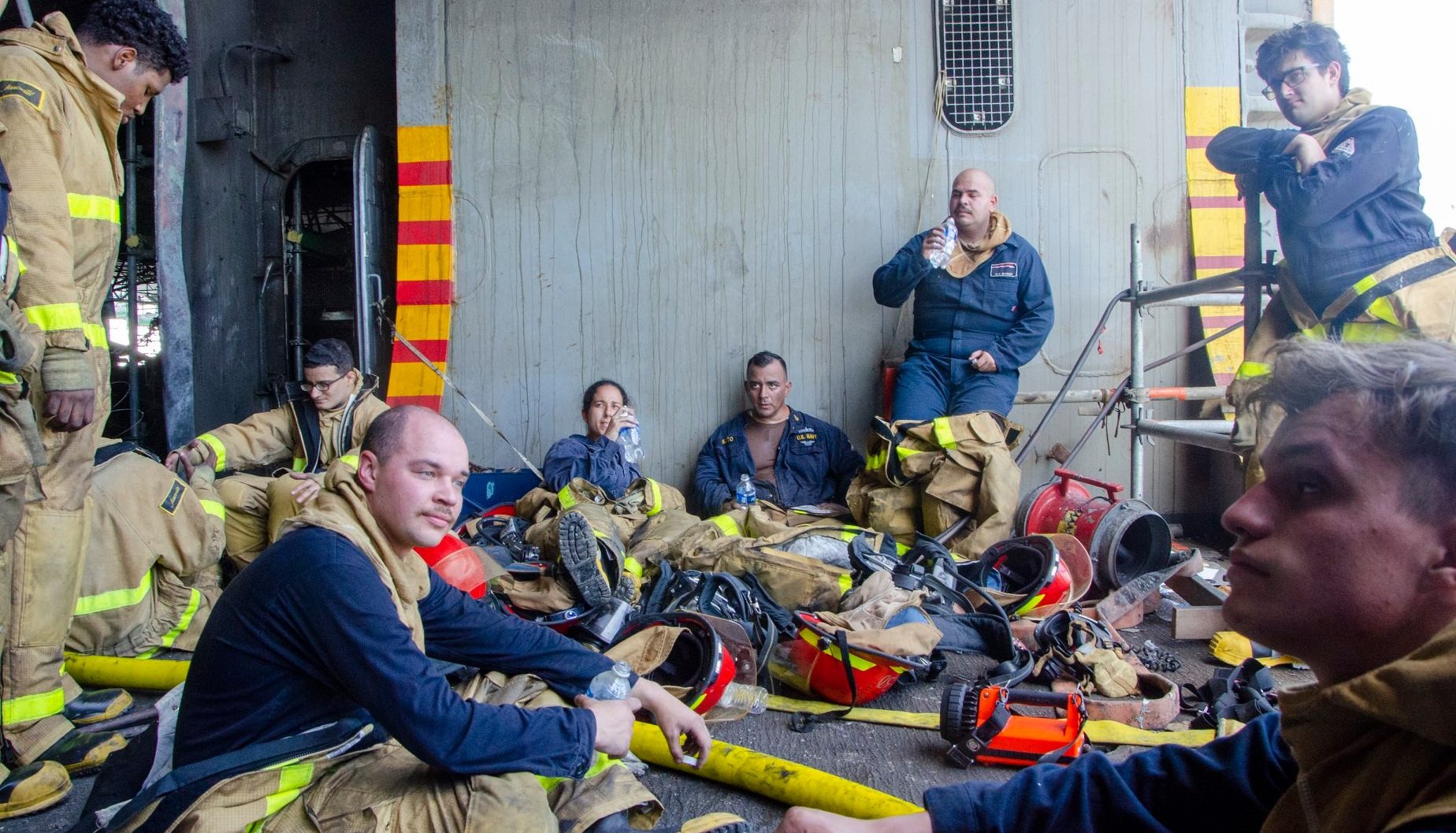 Many questions remain following the major fire that consumed much of the inside of USS Bonhomme Richard (LHD-6). I served seven years in the surface side of the Navy and even visited Bonhomme Richard herself at one point (not as a tourist), but it would be inappropriate to speculate concerning the cause of the fire here.

What I do want to do is to convey some basic information that might help you pray for the crew and for Navy sailors in general.

BHR was in a very long maintenance period, which comes with its own struggles. As the saying goes, “Sailors belong on ships. Ships belong at sea.” While shore time can be nice, especially for sailors with families, working every day on a ship that doesn’t actually go out to sea does take a toll. Proficiencies that may have seemed ordinary at times get rusty. Repeated, mundane tasks start to feel pointless when the ship isn’t performing a real-world mission. As maintenance periods begin to close, work from contractors wraps up and inspectors begin arriving to retrain the crew. When I went through long maintenance periods, I can specifically recall myself and others desperately wanting a change in scenery.

But all of this has a purpose, most of the time. In the case of BHR, the ship was receiving major mid-life upgrades including the capability to launch and recover the F-35B. For the crew, all this effort must now seem completely wasted, and there are few answers at the moment for what is next other than multiple investigations.

The Nature of Ministry on a Ship

If I weren’t a Christian, or just in general had a low view of God’s sovereignty, I would tell you that the quality of any command’s chaplains is a complete coin flip. We know that’s not true because God ordains the ends and the means, but it does feel that way. Given that BHR is a larger ship than most, it rates two chaplains, so an individual sailor may generally have a choice between a Catholic and a…uh…”Protestant.” The latter could very well be less orthodox than the Catholic.

So what happens when neither of the chaplains is orthodox? Since BHR embarks Marines, the Marine Expeditionary Unit aboard will also have its own chaplains whose primary job is the Marines in their command. If the Marines have a good, orthodox chaplain with them, it’s completely fair game for sailors to consult with him and sit under his teaching. However, Marines aren’t presently embarked on BHR.

Sailors also have the option of becoming a command-approved lay leader, which involves submitting a package that includes an endorsement from the sailor’s home church. For larger ships, smaller faith groups such as Buddhists and Muslims can have their own lay leaders since chaplains of these groups are few and far between. For smaller ships with one or zero chaplains, there may be just a lay leader who runs a chapel service for Christian believers.

For those of us who are already prepared to deal with theological categorizations, this might not sound too difficult. For example, a doctrinally-educated Reformed Baptist shouldn’t have a problem sitting under a conservative Presbyterian chaplain 95% of the time. Maybe they’ll poke a few baptism jokes at each other, and no one gets hurt. What sailors will say far too often is that the chaplain isn’t exactly what they grew up with or what they believe and therefore they should not attend that chaplain’s services.

For some sailors, this could be completely honest and misguided. If nobody told you what a Presbyterian is when you were growing up—let alone the differences between OPC, PCA, PCUSA, etc.—18-year-old you might very well feel uncomfortable walking into that chaplain’s service. For others, this is a cover for the same tendency we see among college students to leave their parents’ faith not long after they move onto a campus. But in other cases, especially on smaller ships, there may actually be nothing orthodox on Sunday because there is no (actually) Christian chaplain or lay leader. In fact, there may be no religious service at all.

But since BHR is in port in San Diego, the absence of a chaplain with such exact theology (or lack thereof) is a bad excuse not to be doing something on the Lord’s day, as San Diego does have good churches. I attended one while temporarily stationed in San Diego, so I’m saying this from experience. But if you’re praying for Navy sailors in general, the above very much applies. And in a circumstance like this one, sailors may be approaching chaplains much more than normal.

The crew is certainly shocked, exhausted, and will soon probably become frustrated. Many if not most or all of their personal belongings have been destroyed. The flow of information on what comes next will be numbingly slow. Some may have to embark on other ships in order to work on their qualifications and continue their careers successfully.

Losing BHR even for a couple more years should the Navy decide to repair her rather than scrap her will have some cascading effects on the rest of the Navy in order to make up for what BHR was supposed to be doing. This will make for longer deployments for similar ships and increased scrutiny to avoid another catastrophe like this one. It may even involve reactivation of a previously decommissioned ship such as Nassau or Peleliu, both of which have similar capabilities to Bonhomme Richard but would obviously need some work in order to be reactivated to full service.

The fire may be out, but the stresses aren’t over. Thank the Lord that everyone is alive and okay. Pray for the Gospel to go out among these sailors who protect our liberties. Pray for their continued safety. Pray that they may handle the next few months well until more is decided on how to proceed.

If you wish to help financially, avoid GoFundMe or similar crowdfunding sites where legitimacy is questionable. The ship has put out a list of legitimate avenues of help, and I can personally vouch for the Navy-Marine Corps Relief Society, which does much to help sailors and Marines in all kinds of tough financial circumstances.