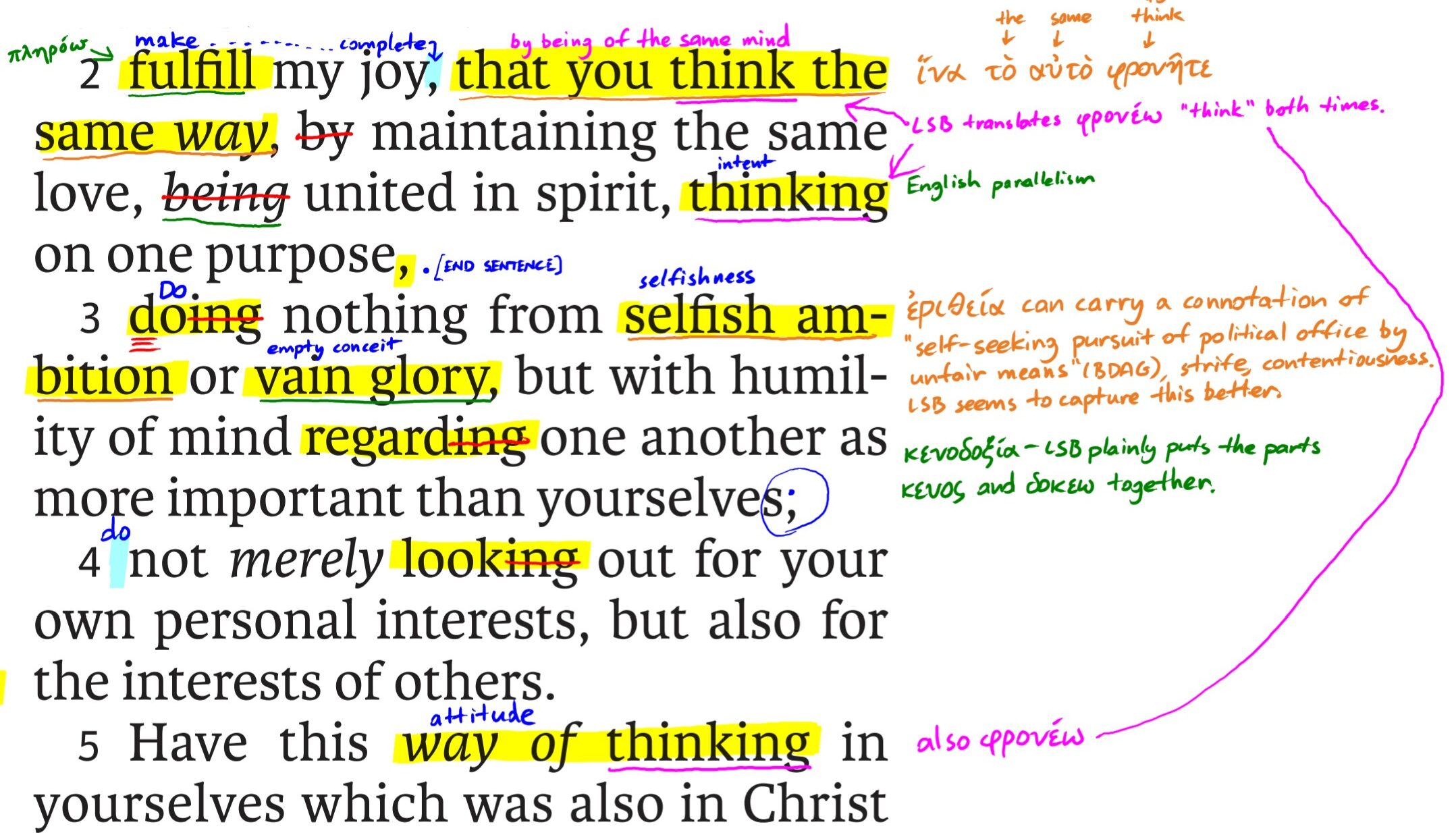 Philippians in the Legacy Standard Bible: Instances of “Think”

In case you’ve been hiding under the sky☘, a team from The Master’s University and Seminary is working on the Legacy Standard Bible, an update to the much-beloved NASB 1995. They recently released a PDF containing the entire text of Philippians, and I’ve made the time to note all of the differences from its predecessor. Unfortunately, the PDF also includes some copyright restrictions that keep me from just posting the PDF with all of my notes written on it. Three Sixteen Publishing responded to my request yesterday and declined me permission to publish the full PDF with annotations. What I can do is post some targeted notes under Fair Use.

☘ That’s a joke about how The Lockman Foundation is bad at marketing, Patrick.

In this post, I’m going to focus on the ten instances of the Greek verb φρονέω (phroneo, “I think”). The LSB gives it an interesting treatment as compared to its predecessor in that its translation of the term is mostly consistent throughout Philippians. Along the way, we’ll take the opportunity to comment on other aspects of the translation within these passages.

The LSB changes “feel” to “think.” We find the particular way Paul is thinking or feeling in verses 3 through 6, where Paul expresses his thanks for the Philippians church and his confidence that “He who began a good work in you will perfect it until the day of Christ Jesus.” The NASB’s “feel” isn’t necessarily bad, but it would break down if used throughout the letter.

“Imprisonment” is changed to “chains,” a plainer yet more poetic rendering.

The LSB also shows its tendency to spell out etymologies in the case of συγκοινωνός (sugkoinonos), where the first three letters are a prefix meaning “with.” LSB renders this “fellow partakers” rather than just “partakers.”

Our key verb φρονέω (phroneo) appears twice in verse 2 and once in verse 5. Whereas the NASB translated these three different ways — “by being of the same mind,” “intent,” and “attitude,” the LSB makes a point using forms of “think” in all three cases. This is sure to help readers who wish to observe the plain English text to find common patterns and do not want the translation to get in the way. I’m sure it will also help pastors who do not want to have to explain “the Greek says” and try to explain how the same word is being used in different places.

The LSB also exhibits a strong effort to retain the original tenses of Greek verbs. In verses 2 through 4, we see a long string of English “-ing” verbs: maintaining, being, thinking, doing, regarding, and looking. Except for “being” and “doing,” all of these are Greek participles. A preacher using the NASB might have a harder time breaking down the English into something usable in an exegetical or sermon outline. In the LSB, the sermon outline is staring the reader in the face, and it’s not even the result of manipulating the biblical text. It’s like God wrote it or something.

“Vain glory” in verse 3 is another example where the LSB makes an effort to spell out Greek words with multiple parts. The pastor is then saved from having to explain the Greek parts of a different English term.

We have another three instances of φρονέω in this passage: two in verse 15 and one in verse 19. In verse 15, the LSB changes the NASB’s forms of “attitude” to forms of “think.” Surprisingly, however, this is not the case in verse 19, which could have been translated “who think on earthly things” instead of “who set their minds on earthly things.” This isn’t necessarily a deficiency — it’s not a poor translation at all — but it does keep the English reader from immediately identifying another instance of the same verb.

Whereas the NASB 2020 editors find the term “let us” to be too archaic and went with “let’s,” the LSB translators disagree and retain “let us” for the hortatory subjunctive that starts verse 15.

Much improvement is seen in verse 16’s “walking in step” instead of the NASB’s over-translated “living.” Various glosses of στοιχέω (stoicheo) include moving in line, to be in rows, or to be in sequence, confirming with a pattern. In Romans 4:12, the same verb is used to illustrate following in the steps of Abraham as if placing one’s feet in the footprints he left behind. “Living” is just too plain here.

By this point, it should be easy enough to see what the LSB did with Philippians 4:2. But this is also a case where some readers might find the rendition to be a little wooden. The NASB footnotes suggest the literal translation, “be of the same mind,” which in my opinion should have been the translation of the NASB’s main text anyhow.

Whereas critics might have a stronger case in Philippians 4:2 against using “think” in nearly every single instance of φρονέω, Philippians 4:10 might be more of a 50/50 case. I would imagine someone might say that “thinking” implies short-term thinking rather than a persistent mindset of concern or meditation. The NASB translates forms of “concern” in both instances of φρονέω in verse 10, whereas the LSB goes to its standard “think.” It doesn’t bother me too much here, as the context makes clear that this kind of thinking as is being commended really is a persistent mindset.

How Pervasive Are These Changes?

Researchers might be able to better verify questions like these mathematically once we have full editions of the electronic text to mess around with. For the time being, I can tell you how I felt as I went through the text of Philippians. It definitely feels like there are more changes here in Philippians than in the Gospel of Mark. Whereas Mark yielded entire pages with no more than five changes of translation other than including minor conjunctions that the NASB omitted, changes in Philippians felt consistently frequent. Out of the 104 verses in Philippians, 37 are completely untouched other than in punctuation or capitalization.

I’ll leave you with this: a ridiculously low-resolution screenshot of the entire epistle that should help communicate the density of changes without violating the publisher’s wishes. I continue to hold out hope that they may change their minds. In either case, the translation continues to impress.