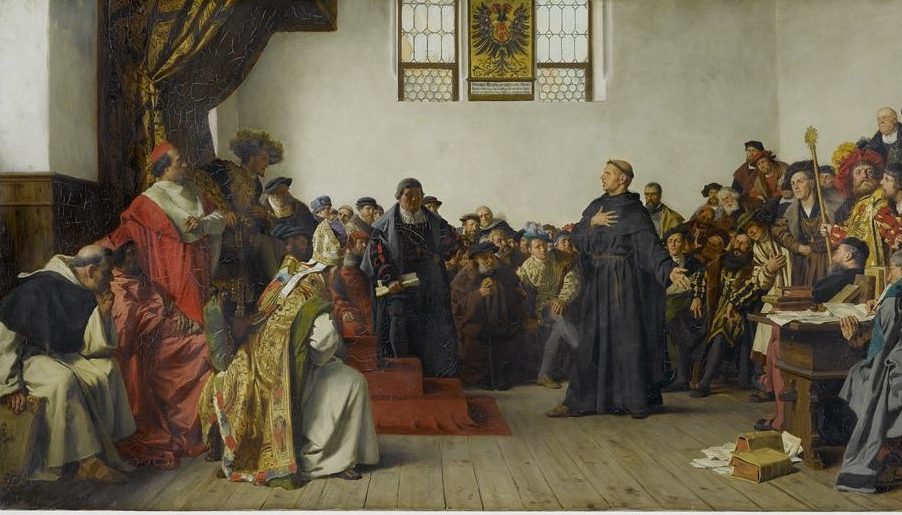 Not by Faith Alone: What is James’ Justification? (book excerpt)

As I attempt to dedicate more time towards completing my evangelistic book, I’ve adapted a short excerpt here for the benefit of ThingsAbove.us readers. As with most of my book, the biblical translations are my own. The character ‘ᴾ’ indicates a second person plural. Luther at the Diet of Worms, by Anton von Werner, 1877

One popular apologetic among Roman Catholic apologists against justification by faith alone is derived from James 2:24.

Youᴾ see that by works a person is justified and not by faith alone. (James 2:24)

Welp! See, it says “not by faith alone!” Looks like we’ve been wrong all along, right? Not so fast. Remember what we just read.

Therefore, where is boasting? It is shut out! By what kind of law? Of works? No, but by the law of faith. For we believe that a person is justified by faith, apart from works of the law. (Romans 3:27–28)

One Protestant approach here is to find in the context of James 2:24 that James is talking about faithful people who demonstrate their faith by their works. This much is true, but most of what I hear that attempts to answer the Roman Catholic objection completely skips over the key issue of the definition of “justify.” Don’t try to get around this by pulling out a Strong’s concordance* to find a different entry; this is the same underlying Greek word. But just like any other language, including English, words in Greek can have different usages depending upon their context. For example, how we understand the word “sick” in “Dude, that is sick!” will depend upon whether the speaker is a medical doctor talking about an ill patient, a reader of a newspaper article talking a terrorist attack, or a commentator at the X Games marveling at a skateboard trick.

Paul’s use of “justify” falls under definition #3. By means of faith in Christ’s finished work, the Father justifies us, i.e. releases us from all claims that have arisen from our sin because Christ is our propitiation, our atoning sacrifice, our penal substitute. But this is not the same “justification” that James 2:24 is talking about. Take note of the fuller context in James.

But someone will say, “you have faith, and I have works. Show me your faith apart from works, and I will show you faith by my works. You believe that God is one. You do well. Even the demons believe, and they tremble with fear! But do you want to know, O empty man, that faith without works is useless? Was Abraham, our father, not justfied by works when he offered Isaac, his own son, upon the altar? You see that faith worked together with his works, and his faith was completed by works. And the scripture was fulfilled which says: “Abraham believed God, and it was counted to him as righteousness,” and he was called a friend of God. You see that a person is not justified by works and not by faith alone.

Take note of the time period in which James says “justification” occurs; it’s when he offered Isaac upon the altar in obedience to God. Isaac didn’t die in that story in Genesis 22; God offers a ram to sacrifice instead, but Abraham proved in his works that he really believed God. Thus, if you refer back to the available definitions of “justify,” we find that James is using definition #4.

Paul actually does refer to the same scripture about Abraham. Here’s how he puts it.

Therefore, what shall we say that Abraham, our forefather according to the flesh, gained? For if Abraham was justified by works, he has something to boast about, but not before God. For what does the scripture say? “Abraham believed God, and it was counted to him as righteousness.”

But to the one who works, his wages are not accounted as a gift but as an obligation. And to the one who does not work but believes upon him who justifies the ungodly, his faith is counted to him as righteousness, just as David speaks concerning the blessing of a man to whom God counts righteousness apart from works:

“Blessed are those whose lawless deeds are forgiven and whose sins are covered out of sight;
blessed is the man against whom the Lord will never count sin.”

Here’s how we know that Paul and James are talking about two different kinds of “justification.” James refers to the time of justification as when Abraham offers his son on the altar, proving that he believes God. Paul refers to “justification” as when “Abraham believed God, and it was counted to him as righteousness,” which occurred in Genesis 15:6. James refers to “justification” as when Abraham takes the knife to slaughter Isaac in Genesis 22:10. Since Paul and James are using the word “justify” in different, yet completely legitimate ways, we can neither say that they are in conflict, nor can we use James as a proof text against the doctrine of justification by faith alone.

You might recall this scripture from the beginning of this book:

If you ever hear someone preaching a doctrine of justification other than justification by faith alone, it’s a false gospel. Be careful out there.

* The Strong’s Concordance, named for James Strong (1822–1894), is a means by which one can find instances of original language words in the English text. By no fault of Dr. Strong, it is probably the most abused work of biblical scholarship ever produced.