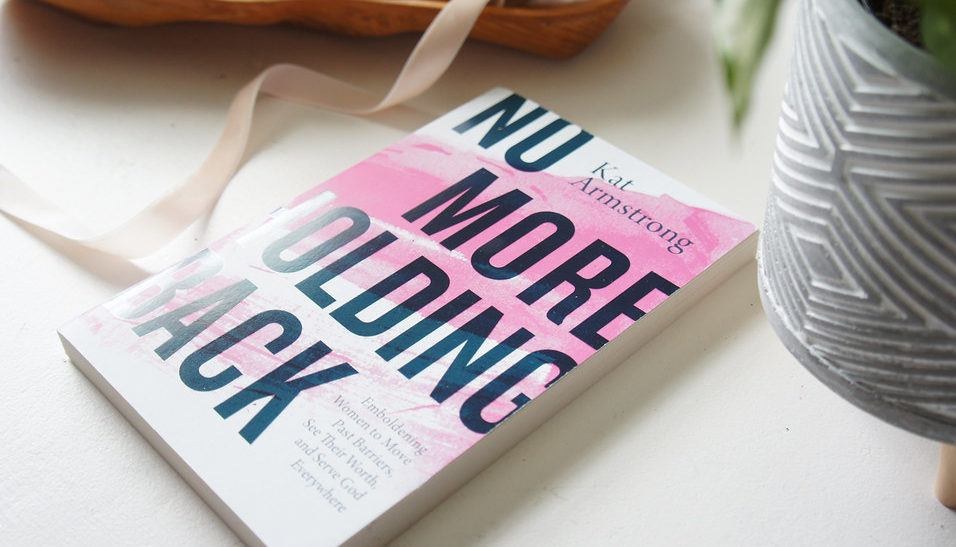 As Kat Armstrong opens No More Holding Back: Emboldening Women to Move Past Barriers, See Their Worth, and Serve God Everywhere (Thomas Nelson, July 2019), she tells a story of an incident. In the middle of a class at Dallas Seminary, she lamented to her professor, “I’m scared to learn too much about Jesus because I am a woman.” She rightly knew this was ridiculous, but a male classmate interjected by shouting “Just stop!”

Horrendous indeed on the part of this male classmate; I won’t give him the honor of the title “gentleman.” In fact, he’s probably a criminal for — get this — following Armstrong into the women’s restroom, where “[h]e took one step inside and put a hand on the door to pry it open” to argue at her more.

For Armstrong, this wasn’t her experience with every man (thankfully!), but it did serve to solidify her belief about a certain gender inequity in the church:

Somewhere along the way, the church has participated in gendering the Great Commandment. And I’m so over it. We have made loving God with our hearts and souls women’s work and loving God with our minds and strength men’s work. But the Bible tells a different story altogether: women matter to God as much as men do. [emphasis added]

No More Holding Back is not laser-focused upon getting women behind the pulpit as one might expect, though the book certainly does advocate this. Some of its emphases are actually quite good. For example, we should not elevate marriage and motherhood so high that it causes detriment to the callings of single women or every woman’s personal relationship with God. When the Commandment says to love the Lord with all our heart, “heart” doesn’t mean womanly “mushy gushy” feelings. The “mind” and “strength” parts of the Commandment indeed apply to women. And — seriously — Christian women should learn more Bible and theology. More on that later.

Why this review? Am I just picking on my alma mater, Dallas Seminary, from which Armstrong also graduated? Rather, I think many of us see a “new” egalitarianism creeping into evangelical thought, and we need to get ahead of it as best we can. Many are already handling this angle within the confines of the Southern Baptist Convention, where Beth Moore, the ERLC, and Founders Ministries are frequent players. Less attention seems to be paid to the Dallas Seminary and non-SBC evangelical angles.

With No More Holding Back, what could have been an enormous encouragement for women who struggle in their confidence and spiritual growth instead bypasses tough scripture passages, mischaracterizes complementarianism, and advocates a feminine “warrior” posture that Scripture does not command. The Fall and the Created Order

One foundational doctrinal assertion that underlies much of No More Holding Back is this: the curse of women being easily deceived ended completely at the resurrection.

Let me expound on that so that it’s understood. We normally say that the curse of sin ended at the cross. Almost nobody within orthodoxy seriously retorts, “That can’t be true because Christians still sin.” We understand that Jesus completed the work at the cross but that the effects are still being played out until all enemies are made His footstool. What Armstrong is saying, however, is that believing women immediately stopped being easily deceived and are no longer easily deceived now.

Mary [Magdalene] does more than just represent that the testimony of a woman can be trusted, that God chooses women for kingdom purposes, and that we, too, can be used by God to go and tell our brothers (and sisters) his good news. Mary Magdalene is Eve’s literary redemption. If Jesus is the second Adam, raised from dust by the power of the Spirit, then Mary Magdalene is the second Eve. Obeying Jesus, Mary fulfilled her mission and was worthy of the truth entrusted to her. The gospel is safe with women. [emphasis added]

Feel free to see this for yourself. You can find the relevant section of Armstrong’s text publicly available at Bible Gateway. A similar version also appears at Ann Voskamp’s site. This also gets explained in Armstrong’s Dallas Seminary chapel message from April 2018.

In How to Use a For Clause: 1 Timothy 2:12 and Egalitarianism, I explained the relationship of 1 Tim. 2:13–14 to 2:12. We find that Paul gives two reasons why “I do not allow a woman to teach or to have authority over a man.” The first reason lay in the created order prior to the fall: “For Adam was formed first, then Eve.” The second reason lay in the fall itself: “And Adam was not deceived, but the woman was deceived and transgressed” (CSB). One then has to ask at least two questions to Armstrong’s assertion. First, why does Paul mention the woman being deceived in verse 14, which was clearly written after the resurrection? Second, how would the cross reverse something already present in the created order prior to the fall (v. 13)?

Armstrong indeed quotes this passage, verses 12 through 14, and then comments:

Children’s storybook illustrations and the apostle Paul’s references paint a bleak picture of womanhood as it relates to following God’s instructions. Generations of respected church leaders and theologians influenced by misogyny made it even harder for me to see past Eve’s foolishness and resist taking it on my own.

She goes on to list a short history of views from figures in church history: Tertullian, Martin Luther, Augustine, John Piper, and Mark Driscoll (source). Branching from these quotes, Armstrong asks:

If the writings of influential Christian leaders and theologians throughout history have taught that women struggle to overcome being duped, one might assume it’s not wise for women to be students of theology or hold positions of leadership in the workforce or in the church. Based on their interpretations, Eve did not steward her knowledge well, and look where it got us. According to them, it seems the gospel message was not safe with Eve. So that next natural question is, Will it be with us? [emphasis added]

Whoa! Hold up! The implications of this statement go much farther than what Paul is saying in 1 Timothy 2. If large swaths of the church believed this, would they all be pulling women missionaries from the field and banning women and girls from Sunday school? Say what you like about quotes like “woman is defective and misbegotten” (Augustine) and “yet she did not equal the glory of the male creature” (Luther). They’re not Scripture, we’re not bound by them, and No More Holding Back makes no effort to address the actual construction of 1 Tim 2:12–14 or to explain how we should understand and apply this passage. In a later chapter, Armstrong looks forward to the new heaven and new earth, “a place where we will reign with Christ, a place where there are no stratified gender roles.” Maybe, but we must think about that in light of 1 Tim. 2:13 — the pre-fall created order.

Armstrong finds her theology of women no longer being easily deceived (we really need a particular, non-pejorative, one-word theological term for this) in the resurrection story of John 20. In finding a strong literary contrast between the Garden of Eden and Mary Magdalene’s finding the glorified Jesus (see the excerpt for how she finds this), Armstrong concludes:

The contrast, the repurposing, is so vivid, so clear. I can barely make it through either passage without weeping. I am no longer a gullible daughter of Eve, and neither are you. When my concerns about biblical deception arise within me, I stand condemned as I hear my enemy say, “You are just like your mother, Eve.” Instead, I should replay my Savior’s words to Mary: “Go and tell your brothers.” The curse of being easily deceived died when Jesus rose from the dead.

Somebody get my Wonder Woman crown; I’m feeling inspired.

There really is much to say about how this scripture passage affirms the dignity of believing women. After all, a woman delivered the news! We would be amiss to allow this misinterpretation and misapplication of the text to cause us to overlook that. We would also be amiss to overlook the literary contrast between Eden and the resurrection. As a case for dismissing a plain exegetical understanding of 1 Tim 2:12–14 and the implications thereof — again, that was written after the resurrection — it’s disappointingly weak. When I purchased No More Holding Back, I was looking forward to interacting with a well-argued piece from the other side of the complementarian-egalitarian debate, especially considering the issues surrounding 1 Tim 2:12–14. Instead, the work seems more to have sidestepped that issue in favor of the “Second Garden” argument. We should garner much about the dignity, capability, and giftedness of women from the story of Mary Magdalene, but women being preachers is not one of them.

My original intent for this review was to have one long review post of about 2,500 words or to split such into two parts. As the review grew and the issues became more heavy — especially in the original languages — it became clear that more was going to be needed. It was only near the end of the revision process that I made the call to split this into four parts. I want to make clear that I’m not making this four parts as some kind of subliminal insult signal about the work. The issues here require a great measure of thinking, and keeping things in smaller pieces should work best for our readers. The exercise should be beneficial in the current cultural context even outside of where No More Holding Back becomes influential.

In part 2, we’ll discuss the “warrior” image that Armstrong seems to project upon the ideal biblical woman. In part 3, it really gets heavy, as we’ll have to dig deeply into the Greek of Acts 16:15. Finally in part 4, we’ll address feminism, soteriology, and women’s spiritual abilities.