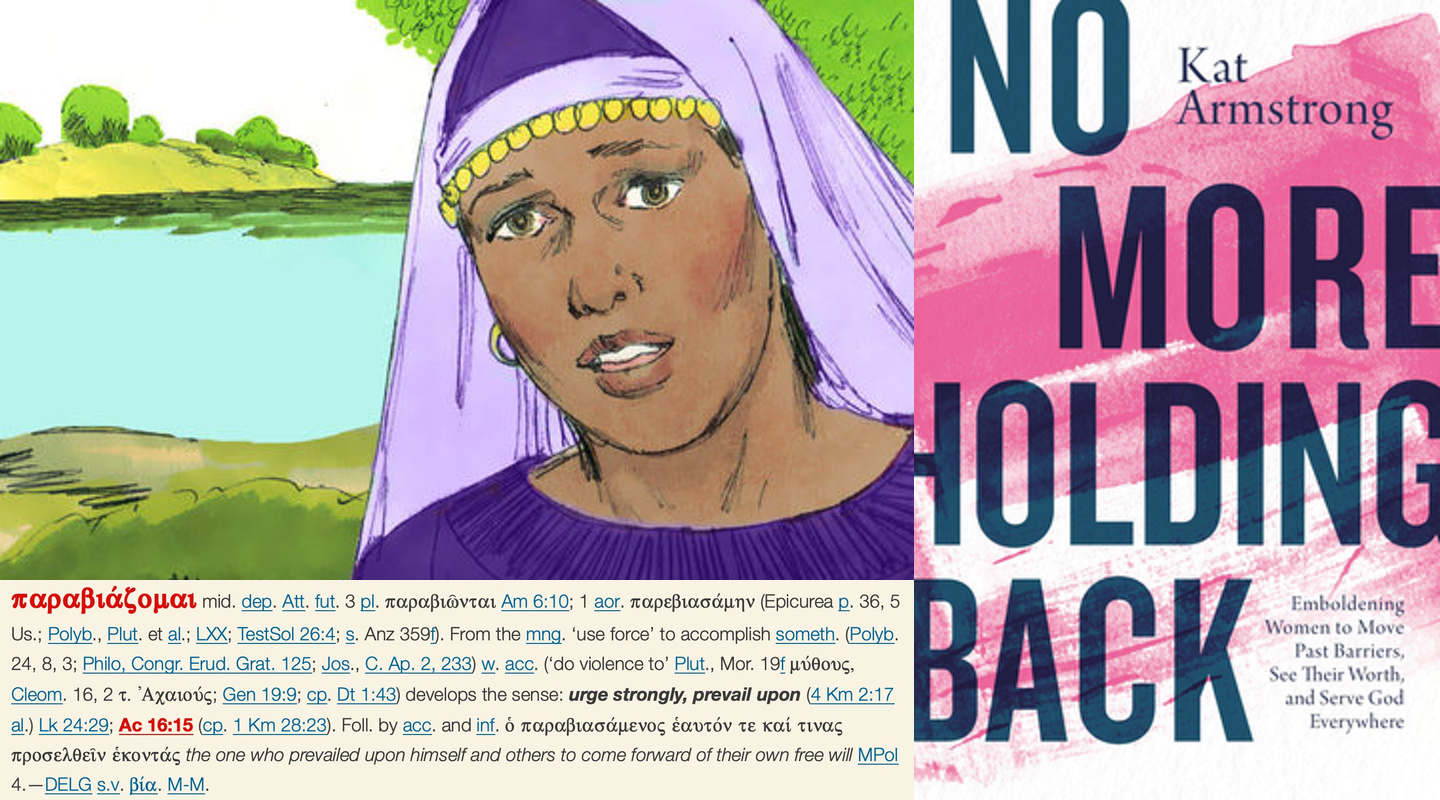 Kat Armstrong’s No More Holding Back: Emboldening Women to Move Past Barriers, See Their Worth, and Serve God Everywhere conveys a certain feminist, idealistic image of a Christian woman who seeks to live out all four aspects of the second greatest commandment. In part 1 of this review, we saw Armstrong’s argument that Mary Magdalene is the “second Eve,” thereby meaning that the curse of women being easily deceived ceased at the resurrection. In part 2, we examined Armstrong’s treatment of Ephesians 5:22 and the Hebrew term ezer (“helper” or “companion”) from Genesis 2:16.

Armstrong concludes No More Holding Back with the story of Lydia in order to sum up her teaching on how women should apply the second great commandment. Her argument is thus split into four parts: heart, mind, soul, and strength. In this article, we’ll focus on the strength aspect.

Warning: we’re about to get Greek-nerdy here. I got confused with this portion myself and initially wrote an incorrect critical note in my paper copy. That tells me that it’s really important to go slowly here and explain. If you don’t read this portion of the book especially carefully, you might be thinking about the wrong English verb. And if you just take Armstrong’s assertion about a Greek verb without digging in, you will come away with a wrong view of the text.

A woman named Lydia, from the city of Thyatira, a seller of purple fabrics, a worshiper of God, was listening; and the Lord opened her heart to respond to the things spoken by Paul.

And when she and her household had been baptized, she urged us, saying, “If you have judged me to be faithful to the Lord, come into my house and stay.” And she prevailed upon us.

Now read this slowly. The italics are original. I’ve added the bold and red where needed.

After Lydia’s whole family was baptized, she persuaded Paul, Silas, Timothy, and Luke to come to her home as guests. “‘If you agree that I am a true believer in the Lord,’ she said, ‘come and stay at my home'” (Acts 16:15 NLT). Luke says she urged them until they all agreed. Sounds like a strong-willed woman to me. Some Bible versions say she “prevailed” upon them. The Greek lexicons define the word persuade as to compel by employing force.7 I’m shaking my head with laughter. Of course she did. She was just exposed to the life-changing news that her sins were forgiven; she had just watched her whole family adopt the truths of Christ and profess faith through the outward expression of baptism. It’s not hard to envision Lydia, a strong woman before Christ, employing her God-given strength after becoming a Christian to compel the evangelists to stay at her home. Lydia was ready to slay the forces of evil.

[italics original; bold and red mine]

This is important: “Urged” and “prevailed upon” are two separate verbs in the Greek text. Armstrong, probably unintentionally, makes them sound like the same actual word, and the reader won’t know this unless she has her Bible open to Acts 16 or is familiar enough with this verse to know that there are two different verbs here. The editor at Thomas Nelson should have caught this.

Now when Armstrong then starts talking about Greek lexicons and “persuade,” this refers to “prevailed upon,” not “urged.” The footnote here refers to BDAG p. 759, which has the entry for παραβιάζομαι (parabiazomai). Here’s the actual entry from BDAG:

BDAG indicates that this word arose “From the [meaning] ‘use force’ to accomplish someth[ing],” and these uses (Polybius, Philo, Josephus) are close in time to the writing of the New Testament. This is useful information for research, but to transfer it indiscriminately to Acts 16:15 is premature. We cannot simply adopt the dictionary meaning we prefer without considering the surrounding context. In fact, the root term βία (bia) actually does mean force or violence, but we don’t get to transfer that haphazardly to our term here.

We also have one more usage of this term in the New Testament, and it happens also to have come from the pen of Luke.

And they approached the village where they were going, and He acted as though He were going farther. But they urged Him, saying, “Stay with us, for it is getting toward evening, and the day is now nearly over.” So He went in to stay with them.
— Luke 24:28–29 NASB

The cultural context is quite similar, as Jesus is about to leave, and the men urge him to stay. Did the men “use force” to compel the Son of God to do something else? I find it more likely that this is a cultural tendency and a Christian virtue to urge (albeit strongly) a friend to stay in one’s home under circumstances like these. This doesn’t jibe with Lydia having a warrior stance of being “ready to slay the forces of evil.” More than this is needed to substantiate this feminist version of Lydia.

We also have an issue that may come about from Armstrong’s choice of translation, in this particular case the NLT. (The overall work switches translations frequently.) Here’s what Lydia says in three different translations. I’ve taken the liberty of removing the complementary structure and have put here only what Lydia said:

If you agree that I am a true believer in the Lord, come and stay at my home. —NLT

If you have judged me to be faithful to the Lord, come into my house and stay. —NASB

The NLT is already a difficult work to take seriously in the first place because it comes closer to paraphrase than translation. Here, it says “If you agree,” which one could read as if Lydia is asserting the truthfulness of the statement “I am a true believer.” Daniel B. Wallace (ExSyn 694), A. T. Robertson’s Grammar (1011), and the New English Translation Acts editor all comment that this is an example of a first class condition, in which the statement is assumed true, not insisted upon being true, for the sake of argument.

Thus, we cannot read that Lydia is insisting that she is faithful. In the case of Acts 16:15, the NLT could be read as going a little farther than an assumption of truth for the sale of argument. It sounds as if Lydia is asserting her status as a true believer when that cannot be the case.

What’s the problem here? If Lydia isn’t insisting upon her being a believer, it is incongruent to then state that she forced the missionaries to stay the night. It is much more likely that Lydia entreated her guests in a submissive and humble manner.

she besought us, saying, If ye have judged me to be faithful to the Lord — the Lord Jesus; that is, “By the faith on Him which ye have recognized in me by baptism.” There is a beautiful modesty in the expression. [italics mine]

She besought them, saying. This hath the force of an adjuration, when she saith, if ye have judged me faithful; as if she should say, I beseech you by that faith which you have approved by baptism, that ye refuse not to lodge with me; and Lydia did by such an earnest desire testify how entirely she loved the gospel. Nevertheless, it is not to be doubted but that the Lord gave her such an affection, to the end Paul might be the more encouraged to proceed, not only because he saw that he was liberally and courteously entertained, but also because he might thereby judge of the fruit of his doctrine. Therefore, this was not the woman’s inviting only, but also God’s to keep Paul and his company there, to which end that tendeth also that Lydia enforced them, as if God did lay hand upon them, and stay them in the woman’s person.

Indeed, a woman can be strong-willed and verbally modest, but this isn’t compelling by feminist force. Lydia is not pointing a proverbial Wakandan spear at the missionaries. She’s a modest, successful, single (probably widowed) woman who earnestly, urgently seeks to serve the missionaries who delivered her the gospel. May the Lord richly bless her!

So far in this review, we’ve seen a sidestepping of 1 Timothy 2:12–14, interpreting Mary Magdalene to be the “second Eve,” obscuring the carried-over verb in Ephesians 5:22, mischaracterizing ezer in Genesis 2:16, and making too much of parabiazomai in Acts 16:15. We’ve also seen some elements of feminist framework especially manifest in the Wakandan women of Black Panther. Clearly, we have a pattern of scriptural misinterpretation. We also clearly see a feminist framework at play.

In part 4, we’ll take a closer look at this framework as well as one that concerns Armstrong’s soteriology, not merely the over-realized soteriology that we saw with Mary Magdalene, but a larger problem wherein the body of Christ is seen as much larger than it actually is. We’ll then conclude with a strong, biblical affirmation of women.