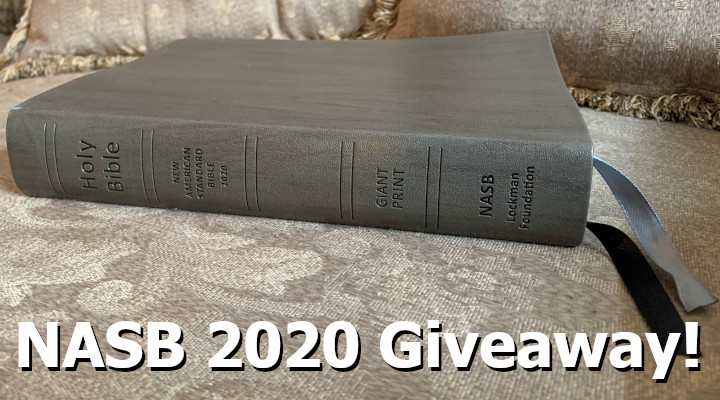 I now have two copies of the recently released NASB 2020. I’ll give you a short preview of the physical editions, and then we’ll dig into the translation.

The most obvious difference when one opens the actual text is paragraphs in non-poetic texts (as opposed to having a line break for every verse). With this in mind, the verse numbering remains reasonably big and easy to search through. In the Large Print Ultrathin edition, the footnotes are organized by bold chapter and verse number followed by footnote numbers that reset to ‘1’ in each verse. The Giant Print also prints direct quotations of Christ in red, whereas the Large Print Ultrathin does not. I’ll likely evaluate the physical print aspects of both editions in a later post. But now that I actually have the translators’ notes, let’s evaluate the translation a bit. A few classic aspects of the NASB translation remain the same. It retains the capitalization of divine pronouns, a major point of emphasis among fans of the 1995 edition. New Testament quotations of the Old Testament are written in small caps like this. Supplied words in English with no Greek equivalent are denoted with italics. Unlike the Lexham English Bible and upcoming Legacy Standard Bible, the tetragrammaton YHWH continues to be translated as Lord except in the case of YHWH Adonai, which is translated “Lord God.”

As for differences that we won’t cover in too much depth, the textual basis has been updated based on the latest available critical texts. In the Old Testament, “Biblica Hebraica Stuttgartensia and, where available, Biblia Hebraica Quinta have been employed, together with the LXX, the Dead Sea Scrolls, ancient versions, and the most recent scholarship from lexicography.” In the New Testament, the text follows the Nestle-Aland Novum Testamentum Graece 28th ed. and the Editio Critica Maior where available, though the translators did sometimes choose alternate readings where preferred. If you didn’t understand anything in this paragraph, don’t worry about it.

In this post, I’ll review a few aspects of gender, doulos (“slave”), and chesed (“lovingkindness”).

To me, and probably many others, it began to look bad here where the NASB 2020 translation of 1 Thess 5:14 read like this:

However, as we all should have expected from the NASB, “and sisters” is italicized in order to indicate supplied words. Moreover, the previous gender-neutral term “brethren” is phased out. Here are some representative examples.

Matthew 25:40 — A standard example of supplying “and sisters”

Here’s a plain example where NASB 2020 supplies “and sisters.” It also features a different translational take on τῶν ἐλαχίστων (tōn elachistōn, “the least”).

The foreword to the NASB 2020 says this concerning “brethren”:

This word was used in past editions of the NASB as the plural of the greek “brothers” (adelphoi) because it can still be used in a formal setting to address members of a profession, society, or church, regardless of gender. However, most people today would seldom use “brethren” informally and not often in most churches. This created the challenge of choosing a replacement that would have the same meaning that led to the original use of “brethren,” and only “brothers” was deemed adequate.

Here, we have a standard example. “Brethren” is replaced with “brothers and sisters.”

“Brethren” appears 206 times in the NASB 1995. Comparing every single instance to the NASB 2020 is a task I will not be undertaking for now, but the next example sticks out as a weird one.

The first two Greek words in verse 16 are άνδρες ἀδελφοί, andres adelphoi, literally “Men, brothers.” The LEB translates this, “Men and brothers.” You would think the NASB 1995 would have translated, “Men, brothers,” but it actually read “Brethren.” NASB 2020 supplies “and sisters” in verse 15 but leaves verse 16 as just “Brothers.” None of these three translations directly translates “men.”

We read in Joshua 2:13 and its surrounding context that Rahab begs the spies to deal kindly with her father’s household and to “spare my father and my mother, and my brothers, and my sisters, and all who belong to them, and save our lives from death.” There’s no postmodern gender-neutral translation here, as the Hebrew actually does have the specific word for “sisters.”

Rahab obviously had sisters, so the NIV 2011 isn’t exactly getting “and sisters” out of thin air because of #meToo. It perhaps would have been consistent for NASB 2020 to include “and sisters” here, but the editors declined to do so. Despite the conservative sentiment against reverting doulos as “servant” because it’s not a strong enough translation, the NASB 2020 actually takes “bondslaves” from the 1995 and makes it “servants” here.

Those who advocate the Legacy Standard Bible and Lexham English Bible practice of always translating doulos as “slave” will like the direction the NASB 2020 took here. The footnote appears to be a means of reminding the reader that Titus was not written in the 19th century.

NASB 2020 switches to a hyphenated “bond-servants” from “bondslaves,” whereas the NIV 2011 uses plain-old “slaves.”

251 times is a bit much for me to go through manually right now. I’ll wait until the 2020 is available in Accordance. But in the instances of chesed in the Pentateuch, we find the following respective translations in the NASB 2020 and 1995.

It certainly appears that ‘lovingkindness’ is out of the NASB 2020 completely, but more research is needed within various contexts to make further conclusions. I suspect many loyal readers of the 1995 who appreciate being able to key in on “lovingkindness” while understanding the underlying nuances of chesed will not be happy. Ignoring Facebook might be really good general advice in the first place, but I speak more specifically of the various NASB 2020 translation samples on The Lockman Foundation’s Facebook page. For example, they released this translation sample of 1 Thess 5:12–22 back in 2018, but it differs from the final printed product.

With that in mind, it is fairest and best to evaluate the NASB 2020 based on the printed edition and not upon The Lockman Foundation’s Facebook posts over the past few years. Previous evaluations such as this one from Opened Heart Ministry may need to be updated or otherwise checked against the actual published text.

I will have more thoughts on the translation as I evaluate it further. For now, I suspect that many loyal NASB 1995 fans will not be satisfied with the changes we’ve observed here.

But just in case I haven’t turned you completely off, I am giving away my Giant Print edition!! If you want it, leave a comment below and let me know what else you would like to have evaluated in the translation. One commenter will be selected randomly. Then I’ll ship it to him or her!