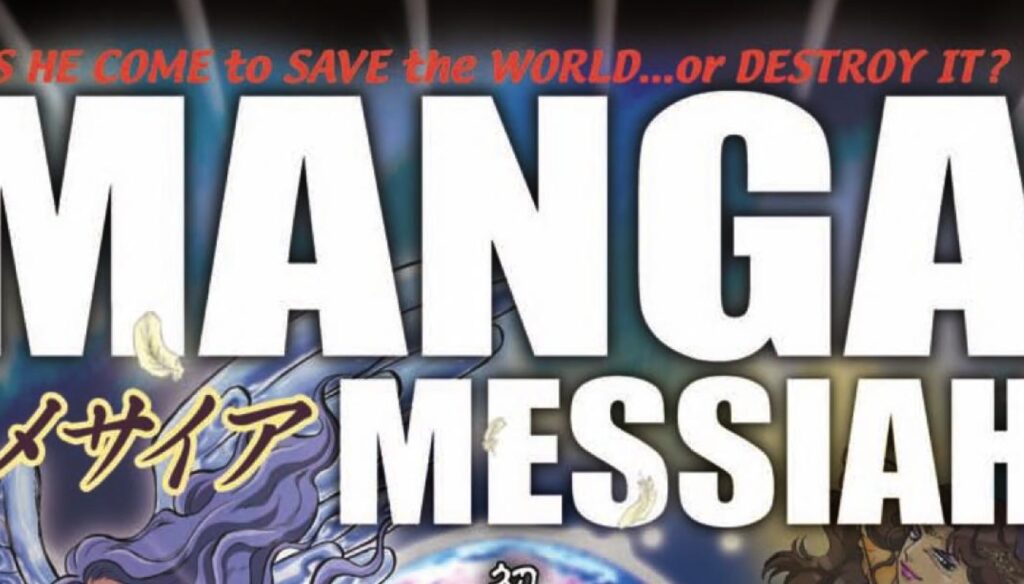 Manga Messiah is the first to be published in a series of manga books that covers the narrative biblical canon. Manga Messiah in particular is a harmonization of the Gospels, starting with the birth story in Luke and ending with Acts 1:8, John 20:30; 21:25. The other books in the series are Manga Mutiny, Manga Melech (“king” in Hebrew), Manga Messengers (Solomon through the Prophets), Manga Metamorphosis (Acts and Epistles), and Manga Majesty (Revelation). Other available languages in the series besides Japanese and English are Arabic, Armenian, Chinese, Dutch, English, French, Khmer, Japanese, Korean, Norwegian, Portuguese, Spanish, and Tagalog.

I’m disappointed to have to make this grammatical disclaimer: the book is not descriptively proclaiming a “manga Messiah.” Nobody is claiming that there is a “manga Messiah.” The word order is merely a product of Japanese syntax.

It’s actually good. I’m surprised to be saying that. We tend to see so much bad in Christian literature, especially anything that remotely looks seeker-driven or flashy. Let me say that again: it’s actually good.

If you hold to a strict iconoclast view of the second commandment, this book is certainly not for you. I suspect much of what I say here is going to come off like, “Other than that, Mrs. Lincoln, how was the play?” I have intentionally not posted any such images in this review, so please feel safe to read on here. The visual depiction of the earthly Jesus is ordinary, not tall or with bright, white robes, etc.

If you wish to preview the book electronically, Google Books has a generous number of pages available publicly. Images of Jesus warning applies.

Language choices fly in the face of the English reader on the very first page of the narrative, where we meet Miryam and Yosef. On the following page, Gabriel the angel, with purple wings, purple hair long enough to reach his lower back, and no floating golden halo, appears to Miryam.

Don’t be afraid, Miryam… God is very pleased with you!

You will become pregnant and give birth to a son!

You must name him Yeshua!

However, this convention of using Hebrew names doesn’t extend to other biblical people. Mary of Magdala and Mary of Bethany are still “Mary,” the twelve still have the English names you’re used to, and the son of Zechariah who prepares the way is properly named John the Baptizer.

I’m no connoisseur of manga, but the visual style does appear authentically Japanese, and I haven’t found any sources that claim otherwise. The English format is bound and presented left-to-right, top-to-bottom rather than right-to-left as in Japanese language manga. All onomatopoeia are translated into English-friendly terms. Judas Iscariot looks like a deceiver from the start with scarlet red hair that covers up one of his eyes. The reader is spared an image of John the Baptizer’s severed head, but the truth of what happened is still there. The crucifixion of Jesus is necessarily gory, especially where the nail is hammered into Yeshua’s wrist, not palm. 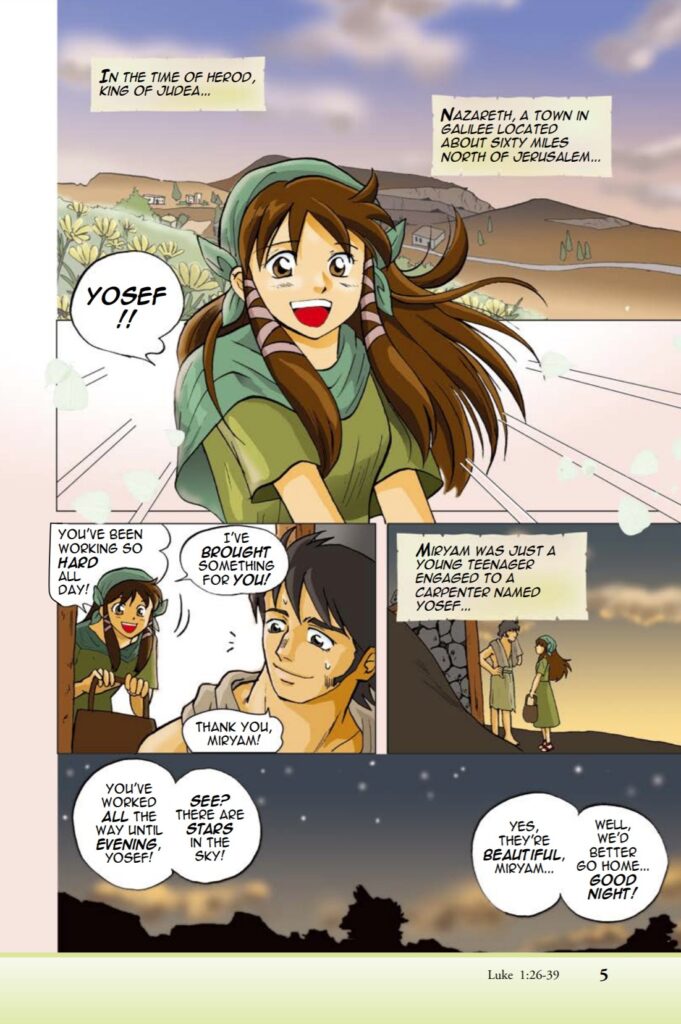 As stated before, Manga Messiah is a harmonization of the four Gospels. Each page of content alongside its page number also contains canonical chapter and verse numbers, a necessary and commendable decision that communicates pointing to the true biblical text rather than being a youthful gimmick. However, the speech is not word-for-word translation. At times, the interpretation is also done for the reader. For example, the depiction of Matthew 16 has Yeshua telling Peter, “And on this rock of revelation I will build my church!” [emphasis original]

In cases where the visual format mandates a particular reading, the choice remains sound. For example, Mary Magdalene is a separate person from the prostitute who washes Jesus’ feet. In Luke 19:3, Zacchaeus is short, not Yeshua.

At times, the book employs explanations or visual aids to explain cultural elements, geography or family relationships rather than leave things hanging for the reader. To explain the family relationship of Jesus and John the Baptizer, we get a family tree where Miryam and Elizabeth are relatives. In John 4, we get a map that shows Samaria sitting between Judea and Galilee. An entire paragraph explains the social and legal consequences of running out of wine at a wedding.

Elsewhere, the dialogue explains elements that otherwise are narrated in the biblical text. When we meet John the Baptist, two onlookers converse about the guy with clothes made out of camel hair and what the meaning of baptism is.

Perhaps the question you’ve been waiting to ask: how is baptism depicted? Immersion. The right way. 🙂 And in fact, the story of John the Baptizer calling people to repentance is one of the most compelling scenes in the book.

TURN YOUR BACK ON SIN…

STOP DOING ANYTHING THAT SEPARATES YOU FROM GOD…

AND START DOING THINGS THAT SHOW YOU HAVE CHANGED YOUR EVIL WAYS!

HIS HEAVENLY KINGDOM IS VERY NEAR!!!

DON’T YOU DARE THINK YOU’RE SAFE IN SAYING, “ABRAHAM IS OUR FATHER! WE ARE GOD’S CHOSEN PEOPLE!!”

GOD CAN RAISE UP CHILDREN FOR ABRAHAM OUT OF ROCKS!!!

But perhaps the more pressing question than baptism is hell and the exclusivity of the gospel. In the depiction of the Sermon on the Mount, the narrow and wide gates and “Get away from me! I never knew you!” are very much there. In sending out the twelve disciples, Yeshua commands, “Do not fear those who can kill the body! Instead you should be afraid of the one who can destroy both your body and your soul in hell!” This here is the one instance of the word “hell.” That said, the depictions could have been stronger and more detailed. There are no visual depictions of hell. The phrase “weeping and gnashing of teeth” appears seven times in the Gospels (six in Matthew, one in Luke) but does not appear in Manga Messiah despite covering pericopes where Jesus warns of this.

Not every detail in the Gospels is covered. At a minimum, the story of the rich man and Lazarus is not covered, though the raising of (the other) Lazarus is. And if the inclusion of John 8:1–11 is a hill to die on, even I can’t help you.

I first became aware of Manga Messiah from missionary friends in Japan, but I had always considered it a novelty and never really dug into it. For churches and missions where images of Jesus do not raise a 2CV issue, it could do a lot of good and ought to replace every copy of The Jesus Storybook Bible in existence. I eagerly anticipate reviewing the other books in the series in the future.

The CSB has fast become one of my favourite translations of the Scriptures. Combining accuracy to the original languages of the Scriptures with clear readability, it’s become my go-to for reading, study and public ministry of the Word. The CSB He Reads Truth Bible, the latest offering from Holman Publishers, is designed with one goal […]

When God commanded, “You shall not steal,” (Exodus 20:15) He knew the human heart would be predisposed to covetousness. You could argue that one aspect of the first sin was stealing, as Adam and Eve took from God what He told them was not theirs for the taking. Thievery is still alive and well in […]

The great hymn writer Charles Wesley once wrote: Veiled in flesh the Godhead see; Hail th’incarnate Deity, Pleased with us in flesh to dwell, Jesus our Emmanuel. (source) This is a most beautiful and theologically rich line, but it’s not without some historical controversy. I’m referring to how we understand the person of Jesus. In […]

I want you to consider your Christmas activities. For some of you, Christmas is a day filled with presents and joy, worshipping God, and visiting with loved ones. Maybe you’ve saved for months to get your children that perfect gift. My wife is making me one of my favorite meals (lengua tacos) as a gift […]

Post Tenebras Lux It means ‘after darkness, light’ and it’s hanging on the wall in my Study and features the pictures of John Knox, Jonathan Edwards, William Tyndale, Martin Luther, and John Calvin. I’m all for free candy, and I think it is certainly permissible for children to dress up and pretend (although I certainly […]