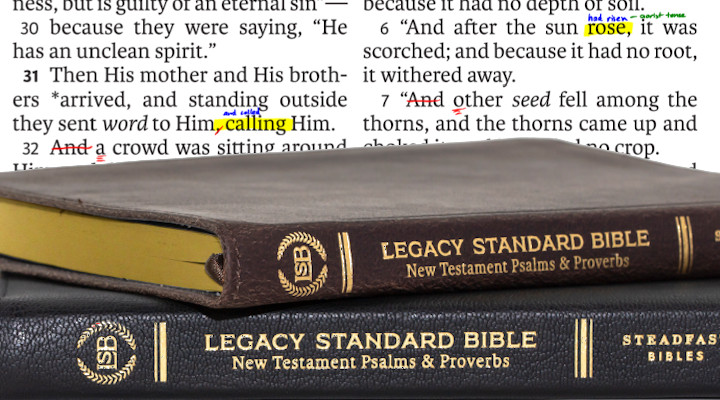 Unfortunately, the only major engagement the Legacy Standard Bible is getting from social media is from King James onlyists. Can we perhaps give the LSB team some love?

Let’s talk about what we know so far now that we have lots of new info, not the least of which is the full text of the Gospel of Mark.

Since my last post concerning the original LSB announcement, we’ve learned some new things outside of the actual Mark translation. The full text of the preface is now online, and it explains more concerning translation philosophy. We had already heard before about the tetragrammaton as “Yahweh” and the Greek doulos consistently being translated “slave.”

Various Internet comments have objected to the use of “Yahweh” not because of a lack of reverence but because such commenters find the rendition to be inaccurate. The LSB preface argues:

The translation “Yahweh” is substantiated by scholarly reconstruction as well as by historical discussions in Theodoret, Epiphanius, Clement of Alexandria, Origen, and Aquila. Consequently, those latter individuals affirm the usage of God’s covenant name in the period of the early church. Preserving this in translation foundationally records what is present in the OT text. It also allows proper distinction between God’s personal name and the title “Lord” (Adonai), which emphasizes God’s authority. Even more, it helps the reader to engage God with the name which He gifted to His people. Thus, the reintroduction of God’s personal name into the translation of the OT is a feature that enhances the precision, intensity, and clarity of the biblical text in English.

Units of measurement and currency in the LSB will translate the original language texts rather than converting to modern American or SI units, which is a very good thing.

With respect to the Hebrew textual basis, the preface writes somewhat cryptically:

The Legacy Standard Bible utilizes the latest edition of Rudolf Kittel’s Biblia Hebraica together with the most recent light from lexicography, cognate languages, and the Dead Sea Scrolls.

This is strange because the newest edition, Biblica Hebraica Quinta, remains an ongoing project, whereas the most recent completely published edition is Biblica Hebraica Stuttgartensia. One assumes the translators will use the latest portions (“fascicles”) available as they continue the OT translation work.

The underlying Greek text unsurprisingly is the NA27/28, but the preface does go so far as to note: “On every variant reading the Society of Biblical Literature GNT, as well as the Tyndale House GNT, were also consulted.” There is no actual problem with this, but I’m going to have to preempt the various King James onlyists who have already assaulted the LSB project’s most recent Facebook posts.

The Society of Biblical Literature is a secular scholarly organization. As it’s described to seminary students who have never been to an SBL or Evangelical Theological Society meeting, the annual meetings for SBL and ETS always occur subsequently in the same location. It’s easier for everyone to schedule airplane flights and hotels this way. The ETS meeting is where all the evangelical Christian scholars can debate amongst themselves. The SBL meeting is where they get together with the Bart Ehrmans and Jesus Seminar types of the world. Point being: Michael W. Holmes, not Bart Ehrman, edited the SBL Greek New Testament; Bart Ehrman did not write the LSB; and if you can’t tell the difference between Abner Chou and Bart Ehrman, I can’t help you.

There’s also an FAQ where we learn that the New Testament, Psalms, and Proverbs printed edition will be released at the Shepherd’s Conference in March, and a full Bible text will be released by the end of the year. There’s also a round table discussion with MacArthur and the translation team. This does appear to be the entire team, as they note during the discussion that they did not individually assign passages to individual scholars; every individual is working on every verse. These men are:

In a similar fashion to what I did with the NASB 2020, I’ve now gone through the first four chapters of Mark to compare the NASB 1995 and the LSB.

The primary text of these screenshots is the LSB. The annotations note how it differs from the NASB 1995. Despite how it might look, it’s not the other way around.

The last page of the released PDF has some strict copyright claims, so I’m limiting my screenshots to stay within “fair use” rather than publishing all my notes. However, I’m open to addressing any individual verses you might have questions about. The following is not a comprehensive index of all the types of changes, but they are the ones I think people will consider when deciding on switching to the LSB at least from what we can see in the first four chapters of Mark.

Conjunctions at the beginnings of sentences are much better preserved in the LSB versus the NASB 1995. While some readers may find a string of six verses all starting with “And” (including the capital ‘A’) to be repetitive, it does more faithfully reproduce how the Greek sentences do the same thing. Mark 1:18–23 LSB with NASB95 annotations. Note not only the opening conjunctions but also the clarified verb in v. 22 and adverb “immediately” in verse 23.

In some cases, word order gets overhauled to more closely match the Greek. We see this in Mark 1:39 where I was unable simply to highlight words and write changes.

If you’re used to your pastor referring to the Greek and saying something like, “The Greek verb here literally means…,” he might be a fan of how the LSB takes many of the NASB 2020’s verb translations and makes them much plainer. The translators’ work at bringing out the tenses of Greek verbs is evident, and they do explain their thinking in the preface. Here in Mark 4:6–8, we see that the LSB went with the plainer meanings of the respective aorist and imperfect verbs. This method of translating the imperfect verb shows up frequently. “They said to His disciples” in Mark 2:16 becomes “They were saying to His disciples.” “Jesus said” in Mark 2:27 becomes “And Jesus was saying.” In a similar fashion to the work on Greek verbs, clarification of Greek prepositions and conjunctions stands out. “When” in Mark 4:10 becomes “as soon as.” “So” in Mark 2:28 becomes “Consequently.”

Despite being a formal translation, the NASB95 sometimes does jump into full-dynamic mode in small portions without warning. One such example is in Mark 1:6 where it reads, “and was eating wild locusts and honey.”

Finally, the translators are not afraid to differ from the NASB95’s text-critical decisions, and we see an example in Mark 3:14 where they select the longer reading, usually a taboo of internal evidence. The LSB includes — and the NASB95 omits — a parenthetical statement.

The LSB includes a textual variant which the NASB95 omitted in Mark 3:14. The KJV also omits this variant, as it does not appear in the Majority Text.

With getting so gritty into details about changes, I run the risk of giving the impression that the LSB is a really different product from the NASB 1995. Before I began doing a full-blown comparison between the two versions, I simply read several chapters (more than four) in the LSB just to get a feel for it. It reads naturally like a word-for-word translation with nothing thorny or obvious that would turn me off. When I zoom out from my annotated PDF pages, some pages look heavily edited because they have more imperfect verbs, opening conjunctions, clarified prepositions, etc. But much also is the same. I don’t get any impression of the LSB translators making changes for the sake of being different. Nearly every change has an identifiable and good purpose. A fully-annotated, yet lightly edited page in the LSB Gospel of Mark.

I seem to recall The Preachers’ Bible getting more attention than this. Can we give the LSB some love? Follow them on Twitter @standardbible and Facebook. Maybe leave a note of encouragement.

More to come later as I get farther through the available sample, and I might even do a three-way comparison with the NASB 2020. That should be interesting. Update: The LSB folks released another video later on the same day this post was published. I’ll leave it here.