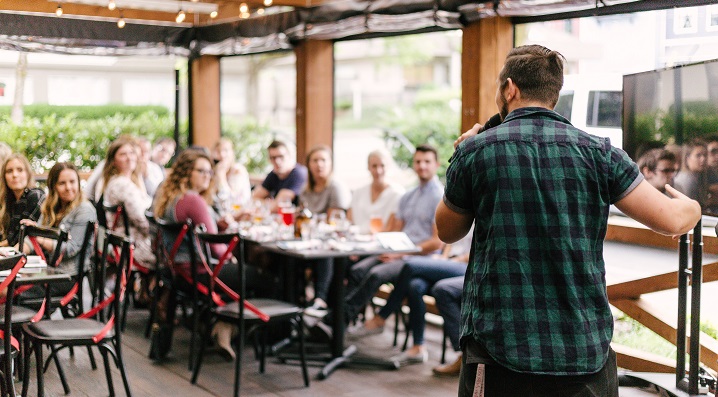 I was just thinking about you, our conversation almost two years ago now.

I wanted you to know that I’m saved, Michael!

It feels so amazing, and I still struggle to make sense of the burden that has been lifted in my life.

I have been personally thanking each person who has played a part in my transition and you were one of the first that I could think of.

This is an excerpt of an email I received on New Year’s Day, 2019. It had been 2 years since I met Dan and nearly a year an a half since we’d had correspondence. The path from then to now is truly a work of God!

There is no doubt in any truly Reformed person’s mind that God blesses the preaching of His Word. We did a podcast episode on the topic, we write about it, and we keep doing it in the church and on the streets.

One of the difficult things about explaining the effectiveness of preaching to people who haven’t bought in is that we very often do not see the positive fruit preaching creates, at least not immediately. More often than not in the 21st century USA, preaching seems to produce nothing more than scoffing or indifference. But we don’t need to give a defense for preaching through the lens of man, judging the results to justify its use and usefulness. We preach because God commands us to, and we also believe something special happens in preaching which is distinct from other forms of teaching and evangelism. It’s also different from plain Bible reading in a very real sense. What man would possibly stand forth and claim to preach God’s Word, and yet stray from the inerrant text, unless he knew God has a plan for preaching?

But we believe God works through preaching in people’s lives in ways that the preacher cannot always see. And, even if preaching seems to drive someone away from Christ (which it doesn’t actually do), the fact is that because we believe God will save whom He wills to save, we can freely preach His saving grace through the blood of the lamb and not fear those who hate the method.

And God Has His Way

Read this excerpt from this post from an outreach I take part in at an event called the Arnold Classic in Columbus, Ohio.

What was encouraging this day was that there was a man who afterward came up to me specifically to tell me he thought I handled myself well and that he liked the way I preached. I was shocked to find out he is a non-believer! He told me he’d heard preaching before and wanted me to know he appreciated my approach. I have actually stayed in touch with him. His name is Dan and he and I plan to discuss Christianity and his thoughts on philosophy. Open air preaching often results in good conversations about the gospel!

This guy Dan observed me preaching and we corresponded for months. He was a professed atheist! Then I received the email above. God started a work in the heart of His elect and several months later, away from the original preacher, this guy believes and is saved.

Take a moment to praise the Lord for saving Dan, and for moving in Dan’s heart to share this good news with me as it encouraged my heart! And say a prayer for new believers like Dan, and those who have yet to believe.

This is the second story similar to this that has happened around me recently. Preaching really does get people’s attention, and God really does use it. And frankly, you should support it, one way or another. I am not saying support any fool who wants to preach and any method he uses; you can preach poorly, and you can preach sinfully.

But I am saying that there are people around this world and around the USA whom I personally know who don’t feel supported by their own local churches and friends. There are men who are willing to stand in the cold and rain or even suffer for the sake of the gospel who don’t feel the power of a praying church behind them when they stand on the street to preach. There are people who are being drawn away by the arguments against preaching because it’s too hard to stand alone. Support men who can preach and encourage more to practice to do so and see if it is a gifting of theirs. Get young men out of church buildings and on the streets or into nursing homes or wherever and get God’s Word out to this generation of evildoers, some of whom may one day be our adopted siblings in the Lord. Support comes in many ways, through prayer, giving, encouragement, coming alongside someone, or simply asking them how things went after you know they were preaching.

Do you need the names of some men who are heralding God’s gospel today and could use your support? Here are a few.