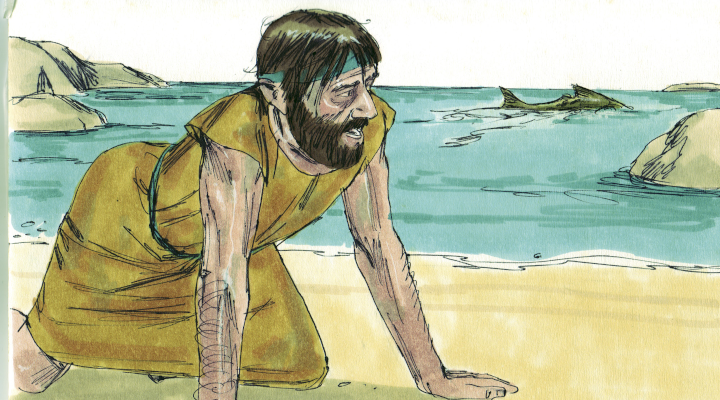 Forty More Days: An Open Letter to My Neighbors about COVID-19 I’m no expert on infectious diseases, and I actually did not stay at a Holiday Inn Express last night. I have no medical qualifications to tell you what is going to happen in the next forty days here in 2020 in terms of COVID-19. Most of you reading this also have no idea. But let’s consider what a city in the Bible did when it was told that it would certainly be destroyed in forty days. If you’re not a Bible person, try to hang on and read this. It’s worth it.

In the popular culture, Jonah is decreasingly known as that guy in the Bible who gets eaten by a whale. For those who grow up in the church, he’s a mainstay of Sunday school flannelgraphs and anthropomorphic vegetables. Few outside of the church today know much more detail than that, let alone that the creature may have been a “big fish.” Even some in the church get Jonah wrong. Less than 24 hours before writing this, I found my kids watching a Bible cartoon that inaccurately depicted events leading up to the big gulp.

But if you consider the story as a whole, Jonah is probably the Worst Missionary Ever. If you can admit that you don’t know why he’s the Worst Missionary Ever, you might consider flipping to the book of Jonah in the Bible and reading it before continuing on here. It’s only four chapters. You might even learn that being eaten by a whale was actually God’s mercy upon Jonah, not merely a punishment.

So after the sea creature spits Jonah out onto dry land, he heads to Nineveh (modern-day Mosul, Iraq) where God commanded him to preach.

And the word of Yahweh came to Jonah a second time, saying, “Get up! Go to Nineveh, the great city, and proclaim to it the message that I am telling you.” So Jonah got up and went to Nineveh according to the word of Yahweh. Now Nineveh was an extraordinarily great city—a journey of three days across. And Jonah began to go into the city a journey of one day, and he cried out and said, “Forty more days and Nineveh will be demolished!” And the people of Nineveh believed in God, and they proclaimed a fast and put on sackcloth—from the greatest of them to the least important.

And the news reached the king of Nineveh, and he rose from his throne and removed his royal robe, put on sackcloth, and sat in the ashes. And he had a proclamation made, and said, “In Nineveh, by a decree of the king and his nobles: “No human being or animal, no herd or flock, shall taste anything! They must not eat, and they must not drink water! And the human beings and the animals must be covered with sackcloth! And they must call forcefully to God, and each must turn from his evil way and from the violence that is in his hands. Who knows? God may relent and change his mind and turn from his blazing anger so that we will not perish.” And God saw their deeds—that they turned from their evil ways—and God changed his mind about the evil that he had said he would bring upon them, and he did not do it.

Take careful note of what Jonah did not say here. Jonah made no promise that Nineveh would be saved if they would repent of their evil ways.

But we do know what happened some 800 years after Jonah: Jesus was in His earthly ministry.

Then some of the scribes and Pharisees answered, “Teacher, we want to see a sign from you.”

He answered them, “An evil and adulterous generation desires a sign, yet no sign will be given to it except the sign of the prophet Jonah. For just as Jonah was in the belly of the huge fish for three days and three nights, so the Son of Man will be in the heart of the earth three days and three nights. The men of Nineveh will rise at the judgment with this generation and condemn it, because they repented at the preaching of Jonah, and—behold—something greater than Jonah is here.

Consider another teaching of Jesus:

There was a rich man who regularly dressed in purple and fine linen, living extravagantly every day. And a poor man named Lazarus was laid at his gate, covered with sores and longing to be fed with the crumbs that were falling from the rich man’s table. Moreover, even the dogs were coming and licking his sores. Now the poor man died and was taken away by the angels to Abraham’s side; then the rich man also died and was buried.

In Hades he lifted his eyes, and, being in torment, he saw Abraham from afar and Lazarus at his side. And he called out to him, “Father Abraham! Have mercy on me and send Lazarus in order that he would dip the tip of his finger in water and cool my tongue, because I am in anguish in this flame!” But Abraham said, “Son, remember that you received your good things in your life, and Lazarus to the same degree received bad things. But now he is being comforted here, and you are being tormented. And besides all this, between us and youᴾ a great chasm has been established so that those who want to pass from here to youᴾ are not able, nor can those from there cross over to us.”

The rich man said, “Then I beg you, father, that you send him into my father’s home, for I have five brothers, that he may warn them, in order that they also will not come into this place of torment.” But Abraham said to him, “They have Moses and the prophets. Let them listen to them.” The rich man said, “No, father Abraham, but if goes to them from the dead, they will repent!” But Abraham said to him, “If they do not listen to Moses and the prophets, neither will they be convinced if someone should rise from the dead.”

By “Moses and the prophets,” Jesus is referring to the writings found in what we now call the Old Testament. In other words, if reading or listening to the Bible doesn’t convince the rich man’s five brothers to turn from their sin, what will? Not even a man rising from the dead, which Jesus did! Burn! Many believed. Others persisted in their unbelief.

We’ve had it pretty good in the West over the past few decades, but we now find ourselves in various states of reaction: utter denial, rank skepticism, mild concern, great worry, and toilet paper hoarding (you knew that was coming). But what about repentance?

Nineveh had no promise from God that He would spare them if they repented, yet even their king said, “Who knows? God may relent and change his mind and turn from his blazing anger so that we will not perish.”

We have it better. We have a God-sealed promise that if we will repent and trust in the perfect work of Christ — his substitutionary life, death, and resurrection — that we will be saved from the eternal judgment that we deserve.

“If they do not listen to Moses and the prophets, neither will they be convinced if someone should rise from the dead.”

If you haven’t repented and trusted Christ, I can’t promise you that we’ll be destroyed in forty days. But as long as the Lord doesn’t return in our lifetimes, we all will die in some finite period of time. Trust Christ now while you have the chance.