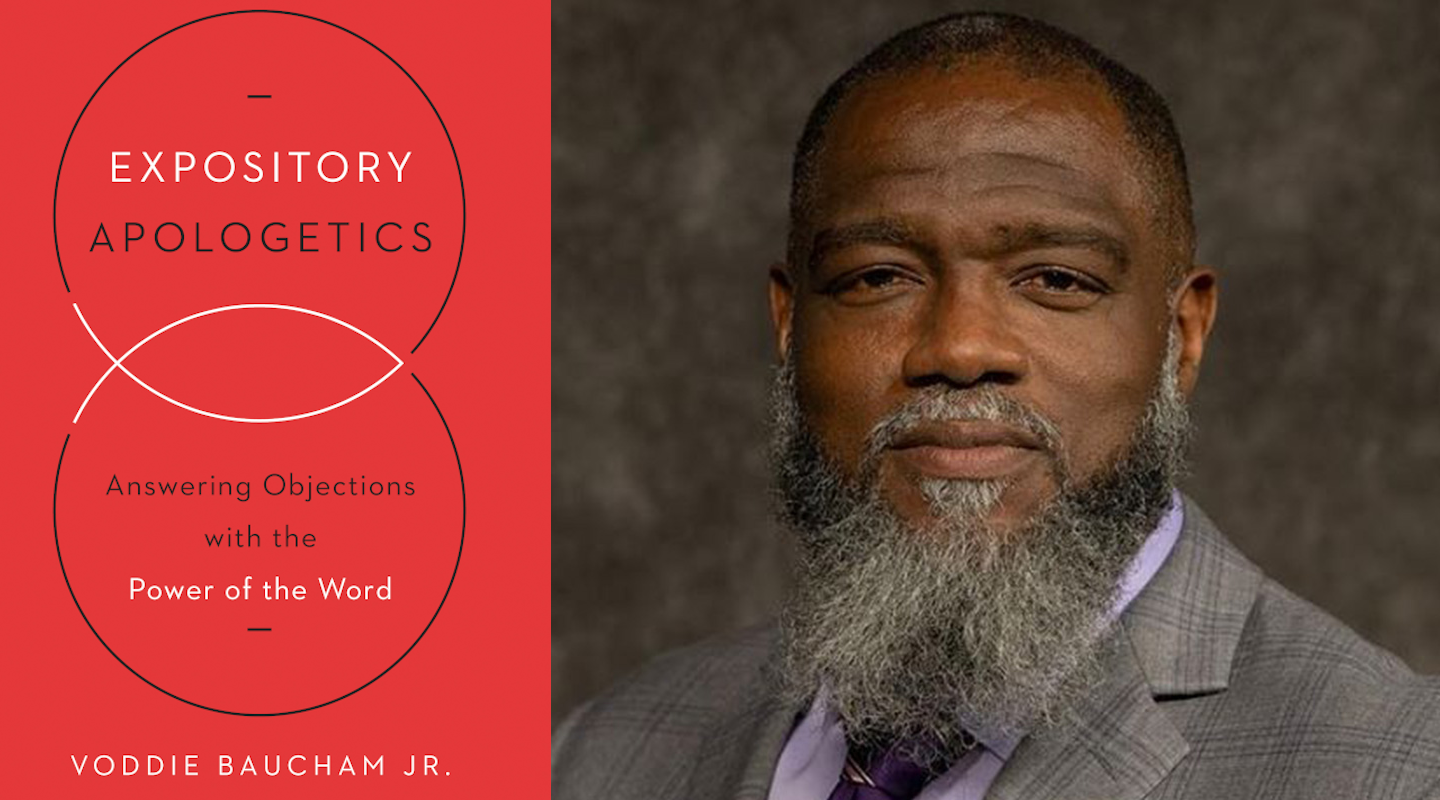 Expository Apologetics: Answering Objections with the Power of the Word I came across Voddie Baucham’s Expository Apologetics: Answering Objections with the Power of the Word (Crossway, 2015) back when he gave a four-message chapel series at Dallas Seminary. I picked up a cheap copy at the chapel for five dollars, and it was about time I got to reading it four years later. It is a remarkably easy read, and I mean that as a high compliment. This is the kind of book for every layperson, and intentionally so, because — as the book jacket says is large text — “Apologetics is for everyone.”

In its simplest form, expository apologetics is about three things. First, it is about being biblical. We answer objections with the power of the Word. Second, it is about being easy to remember. if we can’t remember this simplicity, we won’t use it in our everyday encounters. Third, it is about being conversational. We must be able to share truth in a manner that is natural, reasonable, and winsome.

Baucham begins accordingly with the biblical foundations, primarily Peter’s exhortation in 1 Peter 3 and Paul’s apologetic method found in Romans. Baucham then moves on to the practical matters: making things easy to remember and conversational.

Be Prepared to Make a Defense

I suspect that the general audience of Things Above Us is more aware than the church at large that apologetics is not a realm merely for pastors, academics, and a few know-it-all laypeople. While not all believers are called to be high-level apologists capable of filling in for James White at a moment’s notice, the command of 1 Peter 3:15 applies to all believers.

but in your hearts honor Christ the Lord as holy, always being prepared to make a defense to anyone who asks you for a reason for the hope that is in you; yet do it with gentleness and respect, (ESV)

As we are wont to do with any individual Bible verse that contains such a core truth as this, we may be memorizing and applying this verse without the benefit of the surrounding context. In the book’s second chapter, Baucham invites the reader to consider a broader look at the context of this well-known verse. As it turns out, what comes before that verse we know well, especially 3:8–12, is important for understanding v. 15, as they explain the “identity, attitude, speech, and character” by which we should make our defense. The context that follows concerns the righteousness by which our apologetic is grounded. And whereas we believers have this righteousness given by Christ, “the absence of this righteousness accounts for the unbelief of those who oppose us.” In this way, Baucham transitions to how we rightly respond to unbelief.

Following the chapter on unbelief, Baucham’s exposition on Paul’s apologetic in Romans makes for a fine transition between biblical-foundational matters and practical matters, as Romans really covers both. From the start, Baucham has an interesting insight into the nature of the “dialogue” that most of us detect in Romans.

“On numerous occasions, Paul asks questions as though he were addressing an imaginary interlocutor. He then follows up with an answer to the question or objection. Some suggest that this is a mere rhetorical device. I beg to differ. The evidence suggest that Paul was not merely using a rhetorical device, but was actually answering questions that he had received from skeptics. [emphasis added]

If Baucham’s reckoning is correct, and I believe it is, then Romans is in a sense a compiled but otherwise real apologetic encounter. We thus have much more to learn from Paul’s method than merely identifying the literary device and leaving it at that. The chapter then moves on to Acts 17, which more explicitly also is an apologetic encounter.

After the preceding four chapters on biblical foundations, Baucham builds upon these in more practical matters. As expository apologetics is to be easy to remember, it is fitting that he starts with a chapter on creeds, confessions, and catechisms. We usually think of these three things more in terms of knowing what we believe (and why we believe it if we dig deeper into explanations). But there’s also an enormous practical benefit when it comes to apologetics: you don’t have to defend what you don’t actually believe.

For example, when a Muslim asks me why I believe that Mary is the divine mother of God and the third person of the Trinity, I am under no obligation to defend that belief, since it is not what I hold to be true. Similarly, if I am asked to defend my belief in deceased relatives serving as guardian angels, universal salvation, or salvation based on a mere incantation followed by a life of wickedness (all of which I have heard numerous times), I can simply say, I don’t believe that.

Baucham moreover refreshingly grasps and applies what the “mere Christianity” branch of thought fails to understand about the historical creeds. They were never meant to communicate, “These are the bare minimum things you need to believe in order to be a Christian, and every other issue is totally unimportant and completely up in the air” [my paraphrase, not Baucham’s words or thoughts]. Rather, they were both summaries of the gospel and “tools meant to protect the church from heresy.” He then moves on to confessions, which “separate the rest of the world from Rome and define what it means to be Protestant,” “clarify the distinct beliefs of various groups of Christians,” and “serve as a standard and starting point for disciple making.” Baucham states that the paragraph to which he refers most often is paragraph 1, chapter 3 of the 1689 LBCF, which addresses the problem of evil.

To explain the usefulness of catechesis, Baucham tells a story of how one of his children asked him for three straight days, “Daddy, why did Jesus have to die?” On the third day when his child asked this question, Baucham went through a series of catechism questions to which his child already knew the answers. Suddenly, what was tedious memorization became understanding. The child already knew the answer!

Little did my son, or the rest of my children, know that they were being equipped for expository apologetics. They were learning what to believe, why to believe it, and how to communicate it in a clear, winsome manner.

The next two chapters respectively address the use of the Ten Commandments and the Reformed tripartite division of the law (civil, ceremonial, moral). If you’re dispybapticalvinistic-expialidocious like me, then you’ll certainly find points of tension here. (I addressed this general theological tension in an article last year concerning Andy Stanley, but I warn sternly that I am in no way attempting to draw a parallel between Stanley and Baucham!) The Ten Commandments chapter is not unlike what you might generally hear from evangelists like Ray Comfort. In short, we’ve all broken the Ten Commandments especially if we listen to how Jesus explained them in the Sermon on the Mount (and even I, a dispensationalist, heartily approve).

In the final chapter, Baucham addresses “Preaching and Teaching Like an Expository Apologist.” Since expository apologetics is for all believers, this accordingly extends beyond the pulpit and into the everyday conversation. For one, Baucham argues that “We must assume that our audience will have questions, and we must offer a reasoned response.” This includes anticipating objections that skeptics may have, and it reminds me of the general, good advice given to expository preachers to “show not only why a text means a certain thing but also why it has to.”

If you’re already highly trained in apologetics and can name all of Cornelius Van Til’s children, Expository Apologetics might be merely an easy but enjoyable read for you. For everyone else (this includes me), it is remarkably approachable and seriously beneficial.