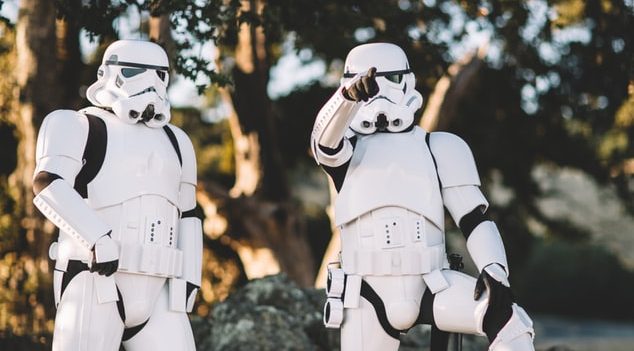 Meet “Ensign” Taylor. “Ensign” Taylor has attended your church for the past 6 months. He’s a nice enough guy, fun to talk to, and he has a really interesting story. You see “Ensign” Taylor lives on the Starship Excellence which, he informs us, is currently in a geosynchronous orbit above the earth while his captain attends meetings at Starfleet Headquarters in San Francisco. Until they get their orders to ship out, “Ensign” Taylor has a lot of shore leave because he works as a warp core specialist. “Ensign” Taylor is easy to spot. He never fails to wear his bright yellow uniform shirt emblazoned with his Star Fleet issued com badge; always pinned to his chest. The kids love him. He’ll tell them stories about the war with the Klingons and what it was like to grow up with an adopted Vulcan sister. Plus, he ALWAYS lets the kids play with his tricorder. Don’t worry though, he remembers all those phaser safety classes at Starfleet academy and even though it’s always on stun, he won’t let the kids play with a dangerous weapon.

“Ensign” Taylor reads his Bible, and he knows it pretty well. He’s a really nice guy, smiling all the time. He’s fervent in prayer and tries to encourage everyone at church. He’s always happy to set up chairs or clean up after the pot luck dinners. But “Ensign” Taylor is never out of character. No matter how anyone approaches him or what anyone says, he’s sticking to his story. He’s a member of Starfleet. His ship is in orbit. He has a Vulcan sister. The only thing you know about the man is this story he’s telling you. One day “Ensign” Taylor tells you he wants to be a teacher. He’s happy to work with the kids, teach the men’s Bible study, or even fill the pulpit on the Sunday night service. If the decision was yours to allow or prevent him from teaching, would you consent to him becoming a teacher in your church?

Of course, for sensible Christians, the answer is a firm and unequivocal NO. “Ensign” Taylor may be a nice man and he probably sincerely loves Jesus, but his life is defined by a fantasy. Of course, there’s no starship. He’s not an ensign. He doesn’t have a Vulcan sister. How can we expect him to accurately handle God’s word if he can’t interact with others apart from his false persona?

Maybe he’s playing a character and “taking it too far.” This is harmless, really, but it does demonstrate profound immaturity. Before “Ensign” Taylor can be trusted to rightly divide the Word of Truth, he should demonstrate he has the maturity to do so. Perhaps he, like many, needs discipleship to encourage him to grow as a man. But such a person doesn’t belong in a teaching position.

Is he dealing with some sort of emotional problem or trauma and is his character of “Ensign” Taylor an elaborate ruse to not deal with a painful reality? Our hearts break for the poor man but he’s clearly emotionally unstable and not ready for a classroom or pulpit. Loving “Ensign” Taylor means rallying your church to shower him in love and perhaps help him find a good biblical counselor. Loving him means going the extra mile for your hurting friend. But loving him ALSO means you can’t put him in a position of great responsibility — a position he’s not ready for.

Perhaps “Ensign” Taylor thinks everyone is in on the joke. Maybe everyone is. So then his life is defined by an elaborate joke. That’s not wrong, but by design, he’s not meant to be taken seriously; and aren’t we supposed to take teachers seriously? Isn’t it an important task with great responsibility? I’m hard-pressed to believe any of my readers or any Christian would disagree with these conclusions when it comes to their local church and how we handle Sunday morning.

Social media, however, is another matter.

One of the peculiar oddities of social media is the existence of anonymous accounts, sometimes called “anons.” Sometimes people have a need to remain anonymous on the internet. Perhaps their employer is sensitive to employees stirring up controversy, perhaps they’ve been threatened, or perhaps life is just easier if they don’t have to reveal who they are online. Those kinds of people aren’t “anons” and they aren’t the types of people I’m talking about in this article. Anons are the “Ensign” Taylors of the online world. They play a character and interact with the world — through social media — as their character. In the Christian world, many of them are lovely people. By and large, they seem to know Scripture and love others. But at the end of the day, they’re still “Calvinist Captain America” and “Reformed kitty-cat.” It’s funny. It’s cute. It’s meant to be entertaining. But should it be taken seriously? Of course not. Yet that doesn’t stop many of them from attempting to pontificate on theology and other matters, criticizing those with whom they disagree and confidently asserting their ideas. Many at this point will respond “But it’s just Twitter (or Instagram, or Facebook, or whatever)!” By this, of course, they mean that it’s not a serious forum but rather a place for light-hearted, less than serious discourse. Yet, many (including myself) will post prayer requests, educational videos, sermons, blog posts, and other things intended to teach the faith to others. Among some of this same group is a general disdain for blocking, unfollowing, disliking, arguing, and other behavior that is frowned upon between Christians. Here then we are caught on the horns of a dilemma. Is social media a host for the church and should we treat it like a Sunday morning gathering? If so, why do we give the “Ensign” Taylors of the world a platform for spiritual influence? We’d never do something like that on Sunday morning, so why on Facebook?. On the other hand, if social media is a less than serious place where people like “Ensign” Taylor thrive, then why look to it for such a serious matter as growing in the faith?

But I think such a dilemma reveals a category error. It isn’t the platform for the teaching that matters. People can learn anywhere and in all kinds of environments. It doesn’t matter if the picture above the teaching is a meme and the tweet below it is a joke. If the teaching is solid, the environment isn’t much of an issue. It is, however, the teacher of the teaching that makes a difference. Scripture gives us requirements for elders, not platforms. It warns teachers, not forums. The Bible trains PEOPLE on how to teach; it doesn’t design venues. We would not welcome the teaching of an unserious person in our Sunday Schools, and we shouldn’t shift such standards in social media. There’s nothing wrong with jokes, but jokes aren’t edifying. If you want junk food, find a drive-thru. But if you want solid food, find a chef.

The modern-day Christian suffers from too many teachers, not too few. We have no shortage of people who are more than willing to disciple and influence us. How do we discern who to listen to and who to ignore? The answer to that question deserves a blog post of its own, but surely a good place to start is to evaluate if the person intends to be taken seriously or not. Certainly among our first quests should be to determine if the teacher expresses a firm grasp on reality. Surely it should mean that they have the courage to put their own name to their teachings if for no other reason than they can be held to account for their words.

“Ensign” Taylor is (likely) immature, not immoral. There must be a place in the church for the immature just as there must be for the mentally or emotionally unstable. But that place should be under the pulpit, not in it. It should be the position of taking notes, not giving lectures. We run a great risk of producing many fools if we entrust a person the place of responsibility who prefers to fool around. What we do as believers is too important to run the risk of producing fools. Through powerful authority, Christ calls sinners to repentance.  Likewise, through genuine sobriety we should call the repentant to maturity.