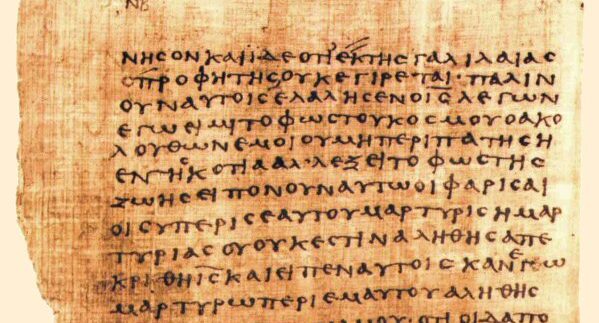 Did They Know Jesus Yet? A Textual Criticism Case Study in John 14:7

For those of you who are tracking the release of the Legacy Standard Bible — the real, actual successor to the NASB 1995 — there’s an interesting change in John 14:7 that’s more textual criticism than translation. Let’s take a look.

Is Jesus telling his disciples that up until this point that they really didn’t know Him in a true, salvific sense? Or is Jesus using the conditional phrase (the “if” statement) basically for the sake of argument? 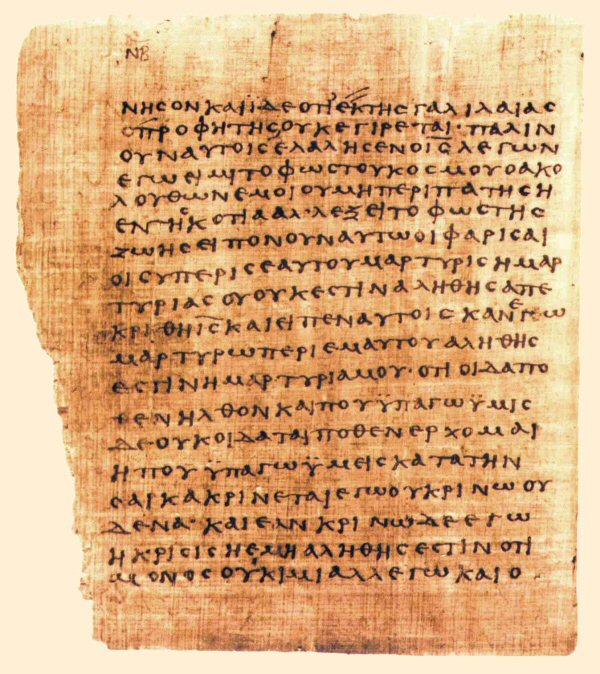 Papyrus 66. This portion starts in the middle of John 7:52 and ends at John 8:16, omitting the Pericope Adulterae. I, unfortunately, do not have an image of P66 for John 14 that I can redistribute.

A Quick Explanation of Textual Criticism

Not all of our readers will need this explanation, and it might not be all that sufficient for some, but I will attempt a quick summary here. Textual criticism is the art and science of making a best-possible determination of what the original manuscripts (the “autographs”) read based on presently available manuscript evidence. Because we do not have the autographs of any biblical text, textual criticism — strictly speaking — is necessary across the entire Bible. However, the vast majority of cases where manuscripts conflict aren’t evident in our English translations. Most of these variants (differences) are (1) neither meaningful nor viable, (2) viable but not meaningful, or (3) meaningful but not viable. It’s only those variants which are meaningful (actually impact the meaning of the text) and viable (actually present a problem of having to choose between variants) that we need to focus our energy upon.

Looking at the Variants

With these in mind, let’s look at our two options.

variant #1: (LSB)
εἰ ἐγνώκατε με, καὶ τὸν πατέρα μου γνώσεσθε
“if you have known [or ‘come to know’] me, you will know my Father also”

variant #2: (NASB 1995)
ει εγνωκειτε με, και τον πατερα μου αν ηδειτε
“if you had known me, you would have known my Father also”

Although looking at the external evidence first is most common, especially when the job of the text apparatus is to tell us which manuscripts read what, this approach tends to produce bias in our thinking. In fact, some of this bias is unavoidable in our example because we’ve already seen which version has taken which reading. If you already have a preference between the LSB and NASB 1995 — I certainly do — you already have a bias. People who favor older manuscripts or more manuscripts may be similarly biased simply by looking at lists of manuscripts that back certain variants. We’ll try to lay that aside for a moment and focus on the merits of the variants themselves.

There are internal arguments favoring each variant. Bruce Metzger in A Textual Commentary on the Greek New Testament argues that the internal evidence favors variant #1 because scribes likely harmonized the text. In John 8:19, we read:

So they were saying to Him, “Where is Your Father?” Jesus answered, “You know neither Me nor My Father; if you knew Me, you would know My Father also.” (LSB)

According to this argument, scribes remembered John 8:19 and wrote that down instead of paying close attention to what was written in John 14:7.

The same commentary, which is meant to be used alongside United Bible Societies editions of the Greek New Testament, includes a note by his colleague Kurt Aland, who states, “The purpose of the Evangelist as well as the laws of textual development have been misunderstood. If a negative and a positive statement about the Apostles stand side by side in the textual tradition, the positive one is usually the later.” In other words, when the UBS committee — including Aland and Metzger themselves — gathered to discuss this textual variant, Kurt Aland was the dissenting voice, and others went with Metzger. They grade the certainty of their decision with a letter grade of “C,” so they admit it’s not a slam dunk in either direction.

We need to decode some of this symbology first. Each of these symbols represents a manuscript or family of manuscripts. I won’t explain every single manuscript, but I’ll at least explain the superscripts and the major highlights.

Advocates of the Majority text argue that textual variants should be judged not by a balanced consideration of internal and external evidence but by the number of manuscripts that favor one variant or another. Because the King James Version and the New King James Version are based on the Textus Receptus, Greek New Testament editions based on Byzantine text manuscripts, the KJV and NKJV both take variant #2.

But the Byzantine text isn’t the only text type. We also have to deal with the Alexandrian and Western text types. Scholars generally prefer the Alexandrian text type because its readings are shorter, more difficult, and less harmonized among each other. Its manuscripts are also generally older, and their readings best explain the rise of other readings at later times. The oldest known Byzantine manuscripts arose as late as the ninth century and were more widely copied thereafter. The Western text type gave rise to Old Latin translations of the New Testament. Its readings might best be described as “decorated with ruffles and flourishes.” Individual manuscripts may exhibit characteristics of different text types in different portions of the Biblical canon.

If this is confusing, my best analogy for this is the different physical characteristics that a human being of mixed ethnic background may exhibit. I exhibit characteristics of both Irish and Cambodian ancestry but reside in the United States. For purposes of classifying my biological ancestry, you wouldn’t call me a Native American, and you would note that my darker skin is Cambodian and my large nose is Irish. In the same way, a manuscript that was found in Alexandria, Egypt may be Byzantine in one or more books of the New Testament and Alexandrian in the rest.

In the case of our problem in John 14:7, Alexandrian manuscripts P66, ℵ, and W, favor variant A. These are all fifth century or earlier. The Western text also favors variant #1 with the support of D. But variant #2 can also claim Alexandrian manuscripts A, B, C, and L. The translators’ notes in the New English Translation state, “The external evidence slightly favors the first-class condition [i.e. variant #1’s grammatical construction], since there is an Alexandrian-Western alliance supported by P66. An additional item of note is that the way I displayed variant #2 above is actually a simplification: there are two versions of variant #2. I simply went with how Philip W. Comfort displayed the variants in his commentary for simplicity.

I Totally Missed All of That (tl;dr!)

Bottom line: both the internal evidence (analyzing the variants themselves and how they relate to the rest of the text) and the external evidence (the manuscripts and their characteristics) seem to favor variant #1 slightly, but there still are sound arguments for variant #2.

Which variant we take to be the original affects the exegesis of the text.

As I hinted earlier, the if-statement of variant #1 should not be taken as doubtful or pejorative. Being what we call a “first-class conditional,” this is an if-statement that is assumed true for argument’s sake, but not so strongly that we should translate “since.” If indeed the disciples have come to know Christ, they will know the Father also. As we find later in the chapter, this fact is grounded upon the very nature of Christ Himself, who is in the Father and in whom the Father is. The tone is hopeful. Philip has an idea: show us the Father. That will be how the disciples know the way when Christ departs. Christ responds to Philip individually (in the singular). Christ may effectively be telling Philip that his question doesn’t make any sense because Philip indeed has known the Father. Philip already knows the Father because he knows Christ, even if he doesn’t understand that yet.

If we take variant #2, Christ is seemingly in a mode of rebuke. Note that up until He addresses Philip in the singular in verse 9, the Greek indicates He is speaking in the plural. Based on Thomas asking how the disciples will know the way, Christ is seemingly appalled that the disciples have been with him this whole time and still have not come to a saving knowledge of Him. Christ follows this with special promises for believers. Variant #2, in my humble opinion, actually causes this portion to feel a little disjointed in Christ’s tone. We still learn, however, that those who know Christ know the Father on account of knowing Christ.

I believe the LSB made the correct call here by going with variant #1, overriding what the NASB 1995 had done. That said, English Bible translations remain split on the issue, so this is one particular area where Christians should be aware when preaching, attending Sunday worship, or discussing the passage with fellow believers.