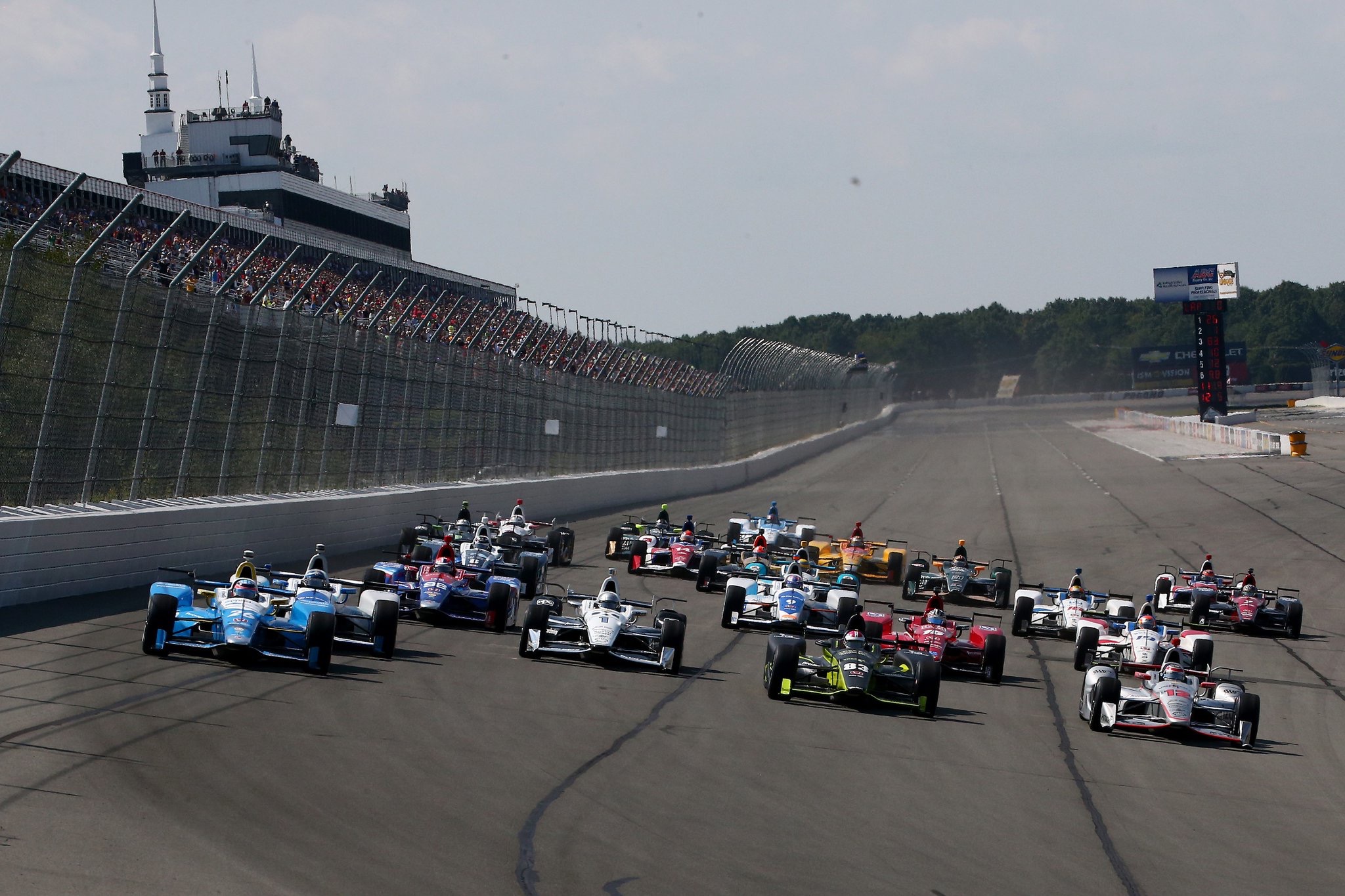 An Invitation to Watch IndyCar This Season This year’s IndyCar opener happens this Sunday, March 11th (12:30pm EDT on ABC, YouTube upload sometime later; don’t skip church), and this is a friendly invitation to non-fans to give it a shot.

Update on March 12th, 2018: The 30-minute “Fast Forward” version of the race is uploaded and posted below. It was quite a thriller and very much not in line with my season predictions.

For the very unaware, IndyCar is top level series of American open-wheel auto racing. This season features 23 full-time driver/car pairings competing over a 17-race season. Each car is a Dallara IR-18 chassis powered by either a Honda or Chevrolet, twin-turbocharged V6 engine. Speeds always depend on the circuit being run, but here’s this statistic for a glance: the pole speed for last year’s Indianapolis 500 was an average of 232.164 mph (373.632 km/h). In case you need more reasons than that, here are five reasons to watch and a few drivers to watch for.

#1. It’s more than just the 500. IndyCar arguably has the best diversity of tracks of any professional racing series. This season will visit nine road courses (left and right turns) and six ovals. To be successful in the overall season, you have to be good at both. Of course, the 500 remains the centerpiece race of the series for good reason because of its history — this year’s running is its 102nd — and it’s always a fast and competitive show.

#2. New aerokits. The new aerodynamic design featured on all the cars is a strong visual improvement. More importantly, the quality of the racing should also improve for a couple of reasons. One, less aerodynamic fixtures on top of the car means less “dirty air” meaning that the aero disruption caused by a car in front is much less, making for more passing opportunities. Second, less downforce means that more driver skill will be involved in getting a car through a corner without sliding out of control.

#3. Driver toughness. In addition to being in incredible cardio shape, there’s a reason why they all have thick necks—pulling up to 4.5 lateral Gs with a helmet on is no joke, especially without power steering. The old adage that race car drivers aren’t athletes is absolutely not true, and especially not true of open-wheel racing.

#4. It’s accessible. Whereas sports in general often come under fire for having too much separation between fans and athletes, IndyCar drivers make a point of engaging with fans in the stands during race weekends. They know they’re in competition to bring the sport back to its peak popularity in the early to mid-90s over and against other forms of racing. It’s not uncommon to have every driver lined up at a table for autographs at a racing event rather than having more sporadic and separated sessions. IndyCar is also good about uploading the entire race to YouTube soon thereafter in case you missed it, so you don’t have to miss it because you’re at church like you should be.

#5. It’s very often competitive! Some races have one car that dominates and wins, but even in these races, there remains the chance that something goes wrong. In other cases, especially at the Indianapolis 500, the competition is just naturally fierce throughout the field. There may be favorites at each track, but a win is never certain when the green flag drops. With the exception of double points awarded at the Indy 500 and the final race in Sonoma, CA, IndyCar doesn’t rely on gimmicks to generate excitement.

I’m going back and forth on whom to list here mainly because of the new aerokits. Now that aerodynamic differences between Honda and Chevrolet-powered cars are no longer a factor, and (we believe) Honda may continue to be stronger in the engine department. Nonetheless, it’s very difficult to rule out the perenially-strong Team Penske Chevrolets. So here are my predictions for the final standings at the end of the season being made way too early. 1st | #9 Scott Dixon | New Zealand | Chip Ganassi Racing Honda
IndyCar’s winningest active driver remains as competitive now than ever, having accrued 40 wins and 93 podiums over his last 17 years in IndyCar and CART. Last season he won once at Road America and finished third in the standings, the best Honda finish in the field. Many compare his skill on par with the best of Formula 1 without having had the fair chance to prove it. With new aerokits, I predict the Hondas will slightly best the Chevrolets in performance, but only time will tell. 2nd | #27 Alexander Rossi | United States | Andretti Autosport Honda
Here’s where my bias comes in, as I was a Rossi fan before he even had his short stint in Formula One. I really think he’d still be around in F1 if he’d brought more funding from a rich uncle or dictator, but he instead came into IndyCar in 2016 and won the 500. He added one more win to that total at Watkins Glen last season. His car swap with Marco Andretti over the off-season may mean he gets better equipment. Rossi’s the man I’m pulling for. 3rd | #1 Josef Newgarden | United States | Team Penske Chevrolet
The current “golden boy” of the series, Newgarden won the 2017 championship (hence why he has car #1) and four out of seventeen races therein, three on road courses and one at the Gateway oval. Penske will continue to have the strongest Chevrolets at a minimum, so Newgarden will be driving good equipment. It would also be a huge mistake to rule out Team Penske just because of Chevrolet. 4th | #15 Graham Rahal | United States | Rahal Letterman Lanigan Racing Honda
Despite his obvious family lineage, Graham has made a good name for himself by having won five times in the last three years including a thrilling finish I got to watch in person at Texas in 2016. Though he’s yet to make a strong enough run for the championship, the new aerokits could be the difference maker. I’m leaning on the Honda difference here to put Rahal Letterman Lanigan up into championship contention. 5th | #22 Simon Pagenaud | France | Team Penske Chevrolet
Pagenaud won the final race in Sonoma, earning double points, but still lost out on the championship due to Newgarden’s strong second-place performance. He may also be out for revenge after having been the victim of a controversial pass by Newgarden at Gateway. He was only nominally behind Newgarden in last year’s final standings, so look for him to try to carry the Chevrolet banner and best Newgarden.

What do you think? Am I totally off with my predictions? Do you think this is completely uninteresting? Do you have an “oh look, another left turn” joke I haven’t heard before? Let me know in the comments.