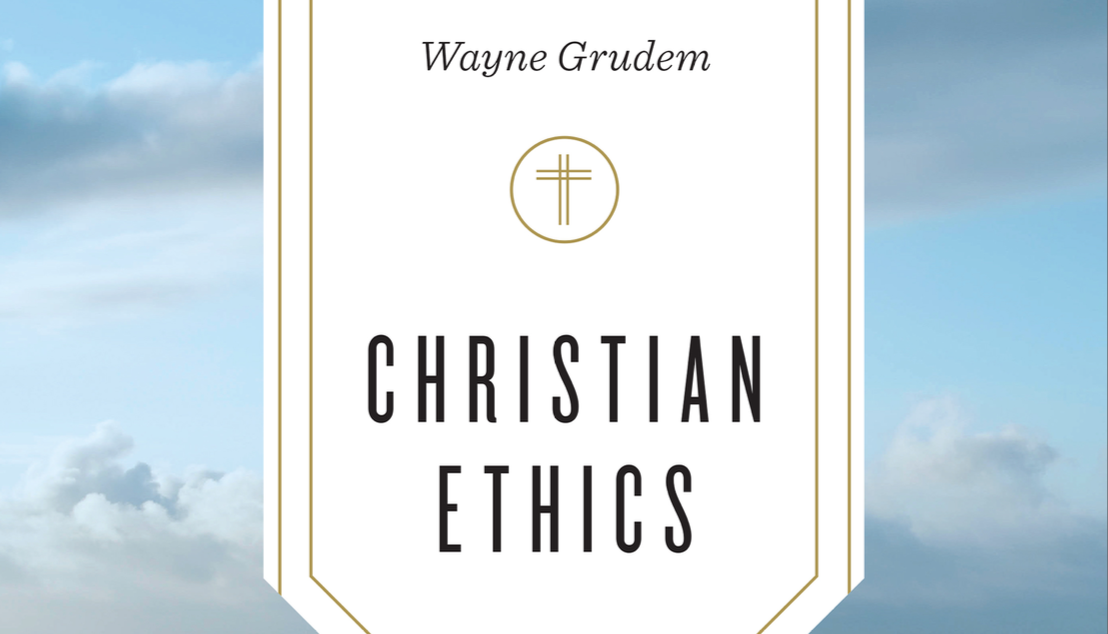 Trigger warning! Not only did Crossway provide me with free digital copies of this book in exchange for an honest review, but it also has Wayne Grudem’s name on it. That’s right — from the guy who is infamously labeled as the greatest academic advocate of the charismatic movement and all of its abuses now comes a book about ethics! Bring on the tongues and glitter clouds!

Seriously though, this is an excellent book, and Grudem is probably against fake glitter clouds. Whether you find Christian Ethics to be good in a few particulars will depend upon your pneumatology and your hermeneutics. I’ll also admit that I have not read the entire book, as it’s quite long, but I believe I’ve read enough to write a sound review of its method and the content which I’ve had the pleasure to examine.

Christian ethics is any study that answers the question, “What does the whole Bible teach us about which acts, attitudes, and personal character traits receive God’s approval, and which do not?”

Thus, Grudem goes on in the course of 42 chapters to address a myriad of ethical topics indexed largely by the Ten Commandments.

The above index really doesn’t do the entire table of contents justice, as there are so many chapters within each part. Just to give a glimpse, part 1 contains the following eight chapters:

Chapters one through four indeed lay a solid foundation upon which the rest of the book goes on to more specific topics. And yes, that last one is where Things Above Us authors and readers may begin to differ, but the point within is at least well-argued and worth considering. To be brutally honest, I find myself woefully undereducated on this very topic, so I at least found it to be helpful in my own processing.

A Sampling of Controversies

A few other chapters are worth highlighting for their contribution to discussions on which typical Things Above Us readers may usually disagree or take particular interest.

Chapter 10 concerns the biblical prohibition against carved images and addresses images of the Father, images of false gods, images of Jesus, and visual arts in general. Unfortunately, his argument that “this commandment does not prohibit pictures of Christ” is quite short and doesn’t appear to address the most classical arguments against this position, even though I find myself presently aligned with his position. Addressing this particular issue in only three paragraphs of text is bound to leave some questions and arguments unanswered, but given the prominence of the question in Christian history and modern-day theological dialogue, I believe the question deserves more discussion.

Since “social justice” appears to be the topic de l’année, it’s appropriate that Grudem has already included a chapter that addresses topics of monetary inequality, helping the poor, government-based assistance, and even a short discourse on why he refuses to use the term “social justice.” This appears to be one of the longest chapters in the book, if not the longest, and is quite comprehensive.

So How About That Charismaticism?

Although Grudem has many good things to say about the sufficiency of Scripture, here’s where we see him toe the line in regards to modern-day charismai.

The sufficiency of Scripture shows us that no modern revelations from God are to be placed on a level equal to Scripture in authority. Throughout the history of the church, and especially in the modern charismatic movement, people have claimed that God has given revelations through them for the church. However we may evaluate such claims, [33] we must never regard such revelations as equal to scripture. [34] Rather, we must insist that God does not require us to obey any moral directives that come to us through such means but are not confirmed by Scripture. [35]

In each of these footnotes, Grudem inserts notes concerning his view on continuing revelation from God and refers to some of his other writings, most notably his Systematic Theology. He specifically denies cessationism in footnote 35:

I do not wish to imply at this point that I am adopting a “cessationist” view of spiritual gifts (that is, a view that certain gifts, such as prophecy and speaking in tongues, ceased when the apostles died). I only wish at this point to state that there is a danger in explicitly or even implicitly giving these gifts a status that effectively challenges the authority or the sufficiency of Scripture in Christians’ lives.

There really is so much to like in Christian Ethics that I find it kind of sad that this part has to be addressed, but indeed, it’s too important to omit. This may not be terribly important for already-cessationist pastors and theologians who are seeking resources that will help them in their work, as this isn’t Grudem’s actual argument for his position. However, a pastor or teacher who rightly feels responsible for his flock should be duly warned before issuing Christian Ethics as a class textbook to a group of students that may not be prepared to come across an argument like this and already have a solid foundation upon which to critique it. Still yet, one may reasonably be less cautious about using Christian Ethics in a church teaching setting than using Grudem’s Systematic Theology, as the latter argues at much more considerable length for continuationist pneumatology.