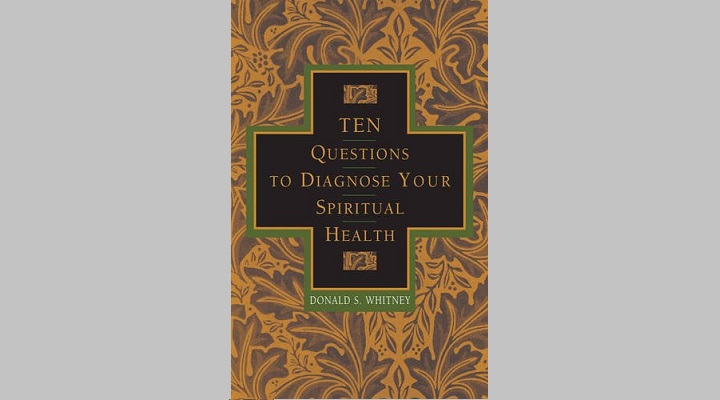 I’ve read one other Donald Whitney book in my life, and I’m sorry to say it was not very good. It is — I think (I’m not sure) — his most popular book. I don’t want to slam a faithful brother here, so I won’t mention the title, but I will say that it did absolutely nothing for me and was, in my opinion, poorly written, poorly argued, poorly researched, and poorly done, which honestly surprised me. It surprised me because Donald Whitney is a good man and a good teacher. He’s spoken at my church twice and both times he gave his boilerplate presentation on praying through the Psalms. I tried to pray through the Psalms a few times, and it never really worked for me. I’m glad it’s worked for other people, but I could never get into it.

Nonetheless, I’d attend his presentation again just to hear the man give it! I’ve never heard a person speak on prayer who seemed to love it so much, and he gave it in such a way that there was no doubt in my mind he cared deeply for his brothers and sisters in Christ attending his seminar. As a bonus, he’s not a bad preacher either. After one of those seminars at my church, we asked him to stay over and preach the next day.

Surely he pulled a polished sermon out of his archives, which is fine, but it was a good one. Romans 8:28 was well exegeted, well communicated, and well applied. I was privileged to take him to the airport afterward and talk with him a bit one on one. He was eager to answer questions and talk about the life of a professor and teacher. All in all, I was impressed with the man which is why I was so disappointed by the one miserable book I read.

Truth be told, I had no intention of reading Ten Questions. It’s not that I was so turned away by the other book that I wouldn’t read this one; it was just that I got this book at some conference somewhere, and anyone who attends those conferences knows how it goes. You throw the book in a pile, maybe it lands on your shelf, and if you get to it you get to it. But you didn’t buy it and you didn’t have an occasion to need it necessarily so more often than not, those conference books end up being shelf decorations.

Well, that was this book — until I started discipling a fine young man from my church and felt the need to work with him on the state of his spiritual life. This book immediately popped into my head. I gave the young man my conference copy and bought an edition for myself on Kindle. I’m glad I did.

Summary of 10 Questions by Donald Whitney

One thing Whitney is good at is getting right to his point. So it is also with this book. It’s a short read, and easily broken into sections and chapters. You can focus in and use one chapter as a single session study. The introduction is short and to the point. He lays out his premises, he lays out his purpose, and he lays out his thesis: “Where eternal life through Christ does exist, there should be not only health but also growth”.  He goes on to quote Jonathan Edwards (who is clearly one of his favorites) to drive home his point: “Christians are Christlike: none deserve the name of Christians that are not so, in their prevailing character…”.

There are ten chapters in this book, one for each of his questions. I don’t believe I’m ruining the book for you by listing the questions here, so I’ll do just that: Rather than break down each chapter, I’ll talk generally about the formula Donald Whitney imposes in each chapter. First, he explains in some detail what each question means. This means defining terms and clarifying certain points that may possibly be in question. After this, he explains the benefits of strength and health in the principle the question is designed to draw out. Then, to close, Whitney gives “Practical steps.” And when he says practical, he means it. There are specific actions he recommends for each question. He gives numbers; instead of saying “spend time in the word,” he’ll say “spend 20–30 minutes in the word”. Practical is the perfect word for this book. It’s instantly applicable and very clear.

It also is thought-provoking. The way he sets up his questions and the depth to which he lays the groundwork was, for me, the most useful portion of the book. He didn’t just write the book to get you to answer his questions. He wrote the book to explain why the everyday Christian needed to have the right answers. In that way, it’s more than just a handy tool, it’s a didactic primer for almost any Christian.

The young man I was discipling and I would often have long and deep conversations over each question. It helps the young man is very bright and thinks far beneath the surface of many subjects. Still, Donald Whitney gave him things to mine and work with at that level. However, I think this book serves its purpose so well that even new believers or older believers discipling those who don’t think deeply would find it very useful. What was most delightful was that it was just as easy to assess my spiritual health as it was to assess the health of the young man I was discipling.

We’d read each chapter on our own, get together, have a good vigorous discussion about what we read, and then usually walk away with an assessment. Sometimes we’d say “we’re both doing okay,” sometimes “we both need some work,” and sometimes a mix of the two. The book goes even beyond that, though, in that I was able to go over the practical steps at the end of each chapter and occasionally assign each of us “homework.” It made discipleship easy to plan, and yet it stayed just enough out of the way that we weren’t both looking for the canned answer or the blank to fill in as so many cooperative guided studies end up as. It was discussion, not just book work. For that, I was grateful.

Donald Whitney wrote a fine book for discipleship, guided our discussions well, provided depth for each discussion, and performed a valuable service with this book. No, he didn’t cure cancer and no one will mistake this work for the next Institutes of the Christian Faith. But for what it is, it’s pretty good.

In the entire world of books—with the 100th percentile being the Bible and zero being Anton Levey’s The Satanic Bible and that infuriating Samuel L. Jackson “children’s book” where he uses the F-word frequently—this book is in the 50th percentile.

In the realm of Christian books about discipleship and spiritual health, meant to be read in a discipleship setting, this book is in the 80th percentile. I give the book 3.5 out of 5 stars. It’ll stay on my shelf and I won’t hesitate to use it again should another young Christian cross my path who needs discipleship. I will recommend it to other disciplers, and I recommend it to you.