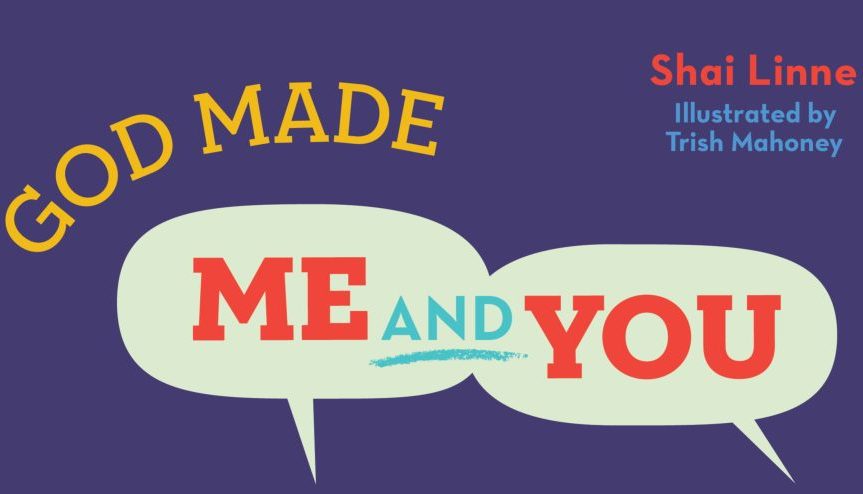 Book Review — God Made Me AND You by Shai Linne

God Made Me AND You begins with school children teasing each other about their ethnic differences. Their teacher steps in and shares that God’s wonderful plan is for our differences to reflect the amazing diversity of God’s creation and the bring all nations to worship him. Told in Shai Linne’s trademark rhyming style that makes it fun for children, Linne also gives tools to parents and caregivers to guide them in how to have this all-important conversation.

— from the back cover

This book took a long time to arrive at our door: two months, in fact. Given the more immediate pressing issues of the culture this year, God Made Me AND You: Celebrating God’s Design for Ethnic Diversity has been in high demand. If you decide to buy it, you might expect a similar wait.

If you have read The Beginner’s Gospel Story Bible (review here), which I highly recommend, you will find Trish Mahoney’s illustration style to be familiar and similarly kid-welcoming. The primary content comes in at about twenty relatively-quick pages, just long enough for a well-behaved four-year-old to hang in there and yet deep enough to teach a six-year-old to ask good questions and meaty enough to communicate the gospel well to its target age group. Of course, this book isn’t just about the gospel.

For the iconoclasts among us, the book contains no visual depictions of God or Jesus, which even this dispensationalist appreciates. 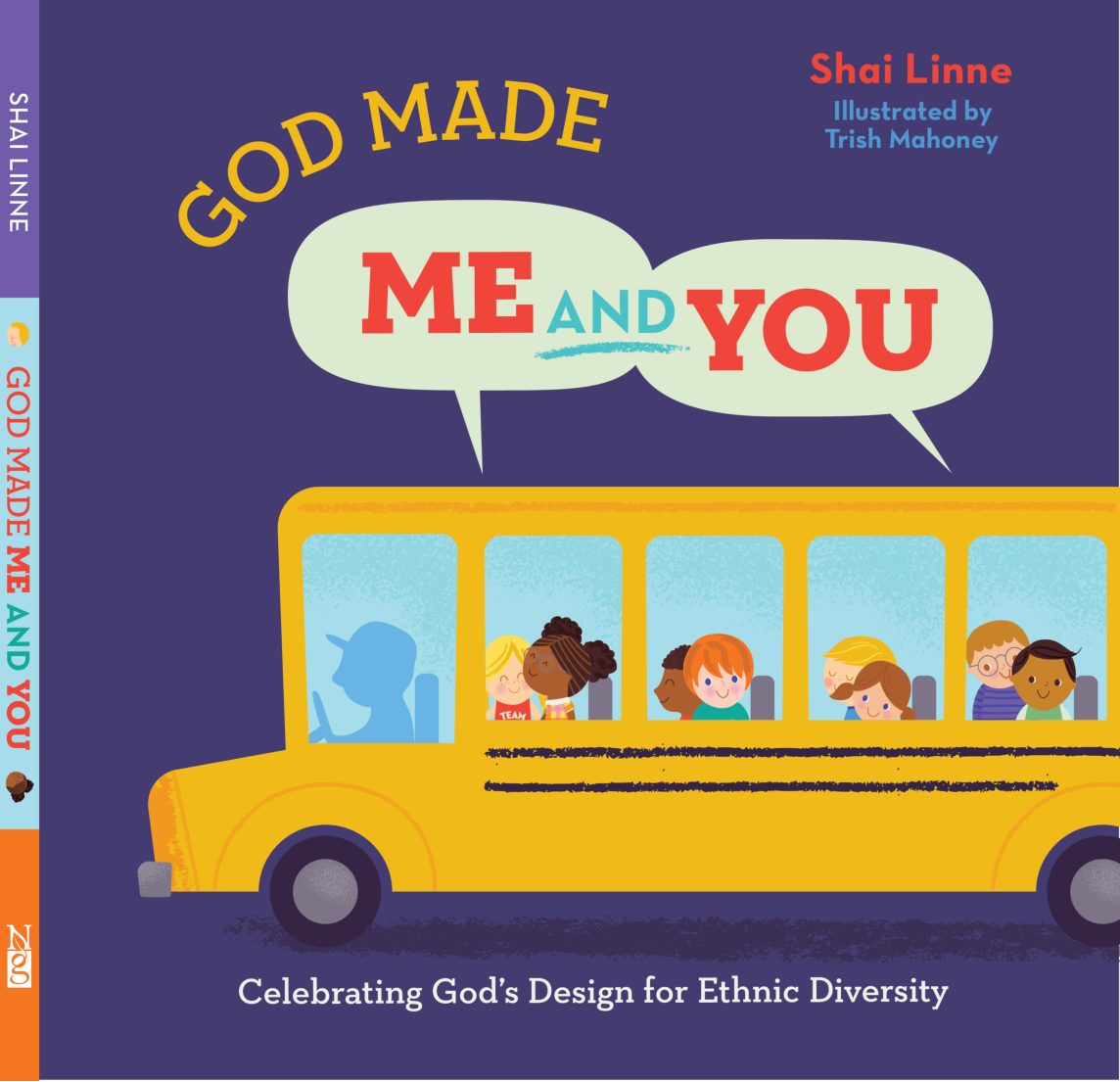 The story begins with children in a classroom waiting for their teacher to arrive. The chalkboard reads: “Today’s lesson: Acts 17.” Two boys, whom we learn are white from the illustration, “teased other kids with all of their might.” They tease one boy for his clothes, a girl for her hair, and a boy for the color of his skin. We learn from the illustration that the latter boy is black.

The teacher, Ms. Preston, walks in, apologizes for being late, and begins to investigate what’s occurring. The boy who is crying doesn’t want to speak, but a girl tells the teacher what happened. The teacher tells the two boys to ask for forgiveness. She uses the issue to segue into the lesson of the day in Acts 17.

What that means is we all have the same origin,
Wherever we’re born, we come from the same kin.
Though many people find this hard to believe,
Our very first parents were Adam and Eve.

To bring many from one is what God decided—
In this way, the whole human race is united.

The lesson continues into Genesis 1, where God displays His glory in the diversity of heavenly bodies, earthly landscapes, and creatures. This then transitions into “those made in His image, both woman and man.” Individual differences are highlighted including height, straight or curly hair, eye color, hair color, and some having disabilities.

Dark skin, light skin,
and all in between
In each color and shade,
God’s beauty is seen.

The Lord knows the number
of hairs on your head,
Whether brown or black;
whether blonde, gray, or red.

What some call ethnicity
and others call race
We should celebrate
as a gift of God’s grace.

The italics above are original to the book, and they are tempting to nitpick in that we might usually say that there is only one race. Linne quite obviously understands this, and one can understand wanting to accommodate the common usage of the term race in this way so that the distinction can be explained to children. More on this later, though.

The book continues on the next page to highlight individual illustrated kids by name to tell them they’re made in the image of God and that they exist for God’s glory. Rightly, there’s no separation or sorting by ethnicity.

A major transition follows here to explain the Fall and how it affects human relations today. The serpent deceives, and Adam and Eve eat from the forbidden tree. Going back to the present day on the next page, the teacher explains that the world is now cursed and how that sin manifests today.

And now, because
of the presence of sin,
People hate for silly things
like color of skin.

The very differences meant
to give God praise
are now reasons for hatred,
so evil our ways.

The gospel is brought in after this. “There’s no type of person that Jesus left out.” God draws many of all colors to faith in His Son, turning strangers into brothers. In Revelation 7, a great multitude praises God.

Each tribe, each people,
each language, each nation,
All thanking God
for the gift of salvation!

The teacher goes on to describe how our visual distinctions look in heaven: “more reasons to give praise to God.”

The scene turns back to the classroom, where the teacher finishes their time with a song.

What is Ethnic Diversity?

The most visually obvious possible objection is that in the illustrations of bullying or prejudice, the offenders are white and the victims are persons of color. This occurs twice in the book. Parents and caregivers would be duly advised to note that anyone of any color is capable of committing this sin.

There is also some conflation regarding the terms ethnicity and ethnic diversity. Following the main plot, Linne includes a section for parents called “Six Ways to Help Your Child Appreciate God’s Design for Ethnic Diversity,” the entire text of which is also available on the publisher’s website. I do encourage you to read this, as it more clearly reveals Linne’s mindset.

Consider the following excerpt, based on Revelation 7:9—

Every tribe. Every language. Every people. Every nation (ethnos in Greek). God’s purpose is crystal clear. A diverse people, ransomed for the sake of His praise and glory. We must teach this to our children. And we must stress that the goal of multi-ethnic worship is not only for heaven, we must pursue it now.

The words in parentheses, along with the emphasis on ethnos, are original. Ethnos is rightly translated ‘nation,’ and Linne is using “every nation” to promote multi-ethnic worship, presumably characterized by people of different ‘ethnicities’ worshiping together. The problem is that the meaning of this root ethnos has changed between first-century Koine Greek and modern-day American English. Churches worldwide gather each Sunday and fail to practice multi-ethnos worship because there are literally no other nationalities within a reasonable radius.

Where does this leave churches in countries like the United States where a multitude of historic ethnicities and complexions is the norm? Are white, black, Asian, and Hispanic Americans different ethne (plural of ethnos)? The essay does not say and doesn’t go into any further detail on what particular steps should be taken. The problem perpetuates itself further when Linne recommends “Seek out interactions/relationships with people of different ethnicities.” If we’re not being racists in the first place, should not interactions and relationships with other people of other ethnic backgrounds already be occurring? And would not seeking relationships with those not from our own home country be even more beneficial?

In making a special focus upon physical characteristics, God Made Me AND You risks causing its readers to conflate inherited physical characteristics with more important differences among human beings. This could have been avoided by, for example, depicting international diversity and regional/national unity among the kids in Ms. Preston’s classroom. On the page that concerns Revelation 7, speech bubbles are illustrated around the page with different languages saying “Thank you” to depict people from every nation praising God, but no people are depicted. Imagine if this could be reworked with different nations saying “Thank you,” and all of the children we’ve been seeing in previous pages are all in the same corner using English. This would then communicate that diversity of skin color, while certainly beautiful and made for glorifying God, does not make people of the same nationality so terribly different in the first place. Notably, the only people visually depicted in the book who are clearly not Westerners are biblical characters.

The Meaning of our Complexions

Back when I was in the Navy, I once received word of a strange incident that had occurred among sailors on liberty (free time off the ship). Details get fuzzy as stories get passed along, but the point will still come across regardless.

Three sailors from my ship were out in town in Japan together. This town in Japan was our home port. Two of the sailors were your run-of-the-mill white Americans. One was a native African who had emigrated to the United States late in his childhood and became a U.S. citizen. While they were walking down a shopping area, the two white sailors realize that their buddy is death-staring at another black sailor across the way. That other sailor was with his own group from a different ship, and he was returning the death stare. The other sailors are initially just confused, then concerned, then really concerned. “Hey, cut it out! Stop that!” They manage to convince the black sailors to stop whatever they might have been planning against each other and carry on. What on earth happened?

It turns out that both black sailors were native Africans, and they were from rival tribes! They, and only they, knew it. Native cultural expectations took over for a moment before they called off anything potentially worse. Mind you, this is in Japan, and these U.S. Navy sailors of native African heritage identified just fine alongside their white shipmates. Skin color played an opposite role that day! Ultimately, more important things won out. These were Americans, U.S. Navy sailors, deployed to Japan, who ultimately identified more with the United States, their ships, and their shipmates than their skin colors, and — especially in the case of the native African sailors — their very upbringings. I have a few more ‘sea stories’ like this, but this will do for now.

All this is to say that I must urge caution. It’s all too easy for Americans to couch racial or ethnic tension solely in terms of complexion because we have ethnic diversity in the first place, and it’s a great thing to have. That’s certainly part of it, but it’s not all of it. Consider God Made Me AND You a tool in your toolbox, but don’t miss the nuances.

Linne, Shai. God Made Me AND You: Celebrating God’s Design for Ethnic Diversity. God Made Me. Greensboro: New Growth Press, 2018.

Click here to view sample pages from the publisher.