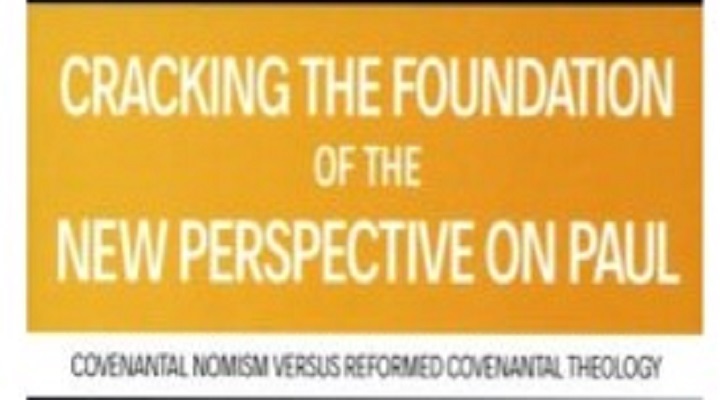 Book Review — Cracking the Foundation of the New Perspective on Paul

Cracking the Foundation of the Robert Cara is professor of New Testament at Reformed Theological Seminary. He has also contributed to Crossway’s Biblical-Theological Introduction to the New Testament and The Doctrine on Which the Church Stands or Falls: Justification in Biblical, Theological, Historical, and Pastoral Perspective, reviewed here.

What does it mean to be justified? Who are the people of God? The Apostle Paul, under the inspiration of Holy Spirit, answered these questions in his New Testament writings but has the church understood him correctly? Did the Reformers get Paul right, or were they reading their own biases and struggles into the text of the Bible? If the Reformers got Paul wrong, do we owe Paul’s teachings a second look?

Protestant evangelicals have historically believed that the Bible teaches that justification is the declaration by God that a sinner is just or righteous based on the finished work of Jesus Christ. God the Son lived the perfect life that we could not and took the punishment that every human being deserves. In the glorious “great exchange,” God imputes the sinner’s sin-debt to Christ, and the righteousness of Christ to the sinner. We can point to all of the Bible to demonstrate justification by faith alone, but in particular, we look to Paul’s letters to the churches in Rome, Galatia, and Ephesus.

What is the New Perspective?

In the last 60 or so years, a movement has developed which questions the Protestant doctrine of imputation and teaching on justification. The movement came to be known as “The New Perspective on Paul” (NPP). Although, as the author points out, there are technically several “new perspectives.” My friend George Alvarado and I discussed the NPP recently on the Things Above Us Roundtable, which you can listen to here.

The fact that NPP scholars were tampering with the doctrine of justification brought out strong responses from various scholars including D.A. Carson and Thomas Schreiner. This book is Robert Cara’s effort to address a gap that still needed to be filled. Cara’s focus is on questions related to Second Temple Judaism. In particular, whether works righteousness was being taught? One of the foundational claims of the NPP is that Paul was not responding to legalistic teaching in Judaism that keeping God’s law is what saves a person, since that idea did not exist.

Cara’s premise is actually very simple. He does not have to prove that every Pharisee or other group around that time was promoting works-based salvation. If he can prove that there was any works righteousness being taught in the context of Second Temple Judaism, then we have warrant to believe works righteousness really was what Paul was responding to, and the New Perspective on Paul collapses (pp. 27-30). Cara’s logic is compelling, but does he prove his case?

First, I really appreciated the measured and gracious tone that Cara uses. Cara personally holds to Reformed teaching and argues for the Covenant of Works, Covenant of Grace, and the Third Use of the Law. At the same time, he also finds common cause with Lutherans and shows appreciation for their “Law/ Gospel Distinction” which he recognizes as part of his arsenal against the NPP (p. 44 n20). Even when the author interacts with pro-NPP scholars like Dunn and Wright, he praises what he sees as good things they have done (p. 34). It weakens our case when we paint our opponents with too broad of a brush. NT Wright may be flat out wrong on justification but that does cancel out his helpful work on the historicity of the resurrection.

The author explains that although there is some variety among NPP scholars, they basically agree on what he calls “The Five Points of NPP” (p. 25). I will not list them all here, but the primary area related to justification is that NPP authors agree that justification is “not the traditional-Protestant view.” The NPP scholar E.P. Sanders coined the term “covenantal nomism” to describe the system of salvation that he believes was being taught. At a basic level, covenantal nomism is the idea that a person enters the covenant by election of grace and stays in the covenant by maintaining obedience to the law (p. 61). Cara points out that Sanders claimed this was Judaism’s only pattern of religion for 400 years, including the time of Paul’s writing, and ending around 200 A.D. Again, the author’s thesis is that if there was any works righteousness being taught, then the NPP collapses.

After explaining the foundation of the NPP in Chapter 1, the author contrasts the Reformed and Covenantal-Nomism frameworks in Chapter 2. In Chapter 3, Cara examines the evidence for works righteousness in Jewish literature. It should be noted that the author recommends that readers who are unfamiliar with Second Temple Judaism go the Appendix – Overview of Judaism’s Literary Sources” (pp. 207-272) before they read Chapters 2 and 3 (p. 36). I followed his advice here and found it helpful in my understanding of the documents under consideration in Chapter 3. Cara looks at the Old Testament Pseudepigrapha, Dead Sea Scrolls, and five “tractates” from Rabbinic literature. His conclusion is that all of these texts contain at least some form of pro works-righteousness being taught (p. 125). Looking at just one example serves to prove Cara’s point. A passage from the Dead Sea Scrolls says, “And it will be reckoned to you for righteousness when you perform what is right and good before Him, for your own good and for that of Israel.” (p. 99).

In Chapter 4, the author looks at alleged works righteousness in “Deutero-Paul.” Why “Deutero-Paul”? Some NPP scholars do not believe that the apostle Paul actually wrote all of the letters attributed to him. In other words, when reading NPP authors, it is important to remember that they may not even allow 1st Timothy, 2nd Timothy, or Titus to factor into their claims about what Paul meant (pp. 215-216). Cara’s response at this point is brilliant. Putting aside the issue of whether Paul actually wrote everything attributed to him, clearly someone in the First Century AD was presenting these views (p. 216).

Chapter 5 serves as a summary of the previous chapters, followed by a lengthy appendix (pp. 197-272). Standard bibliography and scripture, subject, and texts source indices are also included (pp. 273-312). There are several technical theological terms throughout the book, so if you have never heard of Pelagianism, Semi-Pelagianism, or even legalism, then I would not recommend you start with this book. That being said, Cara’s writing is clear and should still be accessible to the average believing reader.

Cracking the Foundation of the New Perspective on Paul is an important contribution to the growing number of responses to the claims of NT Wright and others who say that Protestantism has misunderstood what the Bible teaches about justification. This is a necessary book for the pastor-theologian. Theological curiosity and intrigue energizes certain types of people (myself included), but the ultimate desire for all of us should be to respond faithfully and clearly whenever were are asked, “What must I do to be saved?”