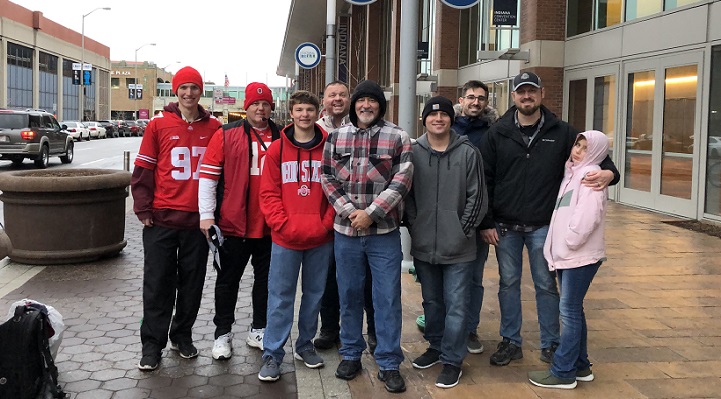 Just four months ago I was getting ready to do evangelism at the Ohio State University’s home football games. Four months later, I fulfilled my commitment by preaching at all 7 home games. By God’s grace, I was also able to preach at an away game in Ann Arbor with good brothers and a sister there as well as visit Indianapolis for my 5th of the eight Big Ten championships which have been played there. Our home team Buckeyes have been there 4 times and my team has been there each time to minister to our fans. I report to Sports Fan Outreach International with a list of people who helped me evangelize each week. I received a report this week stating that I had a total of 22 evangelists accompany me this season at Ohio State. That doesn’t include Ken, Brandon, and Nick who also met me in Indianapolis. That means that we had a total of 25 people reaching out to the world with the gospel this season, Praise the Lord! Caleb and Ken catching up while passing out tracts.

The name of the game is preparation when it comes to evangelism. We had plans to evangelize from about noon to 5 on Saturday before the Big 10 Championship was delivered by Heisman hopeful Dwayne Haskins and his crew. In order to do that we had to leave Columbus by 8:30 and stop to pick up Kurtis near Cedarville U. Caleb drove from Akron, an additional 2 hours, and Ken, Brandon, and Nick drove from Illinois. Historically it has been a cold day, with occasional snow flurries. This year it was warm enough to give us cold rain. We had to have a plan to keep tracts and electric equipment dry. Brother Chris showed up and brought us dinner! Praise the Lord for faithful saints and friends.

One of the highlights of team evangelism is the relationships you make and the friendships that form. Although I have a common Spirit with all Christians, the ones with whom I labor on the street become dear to me because of that shared experience. There’s something that happens when a group of men, women, and children have to endure mocking, weather, and fatigue together that anyone who has been part of a team understands. I am grateful also for friends like Chris Dean who, although he could not stay to preach with us, dropped off dinner for our team for the second year in a row. Ken bringing the Word of God to the lost and the saved within earshot!

A primary goal for my teams is to always have the Word being preached. We love tracts, too, but I believe preaching is an important method. God gifted us with 5 men who desired to preach Christ that day. We were able to easily fill 5 hours of preaching without anyone becoming overtired.

Well, except Kurtis who at one point preaching for almost an hour and 15 minutes while I was talking to Chris…then while I was preaching a coworker of mine stopped by to say hello. When Kurtis saw that I stopped preaching, he got back up and spent his entire voice for Christ that day. Thank you Jesus for that dear saint! Brandon, a pastor, on the left preaching, while Kurtis a freshman at Cedarville hands out tracts.

As part of my outreaches, I always try to gather the team together to corporately worship the Lord Jesus in song. This Big 10 Championship game was no different. Twice we gathered to set our minds on Things Above Us. Singing publicly centers our thoughts on why we are there, puts us in the spirit of fellowship with our Lord and each other, and settles our nerves a little. We sang a few Christmas hymns which was also special. I love seeing people reading the tracts we pass out!

In September I ordered a box of 10,000 tracts from One Million Tracts. As of today, I have just a few dozen remaining. Granted I shared some with others, but I can safely say we passed out at least 8,000 tracts since September. Just think of God’s gospel being in so many hands!

On Saturday, there was a moment when Jason Roberts gave a lady a tract. She stopped to look at it, then asked him, “Were you guys here last year?”

She pulled a card out of her pocket and held it up to him and said, “I haven’t worn this coat since last year at this exact location. I put it on today and found your tract in there from last year.”

May God draw her to Himself! That is one of the reasons we go to the same locations, and we go consistently so that people will see that and maybe become interested in reading our tract or listening to the preaching. God sent us some sunshine after a dreary cold day of rain and blustery winds which destroyed Caleb’s umbrella.

We had a really enjoyable season. You can read about the rest of the games here on my website if you like. Thank you to those of you who prayed. Here are some of our answered prayer requests from this season:

Thank you also to everyone who contributes financially to this ministry. There is a cost to buying Bibles, tracts, gas, food for the troops, ponchos, speakers and microphones, hand warmers, et al. And it is a wonderful gift to have support so that those who evangelize are taken care of by the church. This car was picking people up. The lady looking up at Kurtis told him “Good job.” God always sends us encouragement through His people.

Thanks to my bride, Erin, and my family who endured what has been the longest and busiest season of ministry for our little family. I could not have done this without your help, Erin. I love you and may any fruit that increases, increase to your credit.

Last, and definitely not least, I thank my Lord and Savior Jesus Christ. His grace abounds to me, a sinner apart from His imputed righteousness. Many times this season He brought to my mind how wicked and evil I once was, and I have been humbled to be selected to serve Him and lead some of His people. I trust you know Him, but if you don’t, please stop now and repent of your sin and place your trust in His work for sinners. Trust that His death and burial is what you deserve for your sin and that His resurrection guarantees that God can justify even a sinner like you are.